Dowering poor girls was a common concern in Italian cities as well as a popular way of recommending one's soul to God, at least since the 14th century. As urban society recognised in undowered women a potential threat to its moral and social stability, what had been a pious private effort became the business of specialised, self-perpetuating agencies, with the establishment of charitable dowry funds. Mixing credit and piety, the Bolognese Monte of Matrimony was designed in an innovative way, and differed substantially from other similar foundations. The Monte addressed the difficult problem of giving the girls a chanche to marry, and thus saving the honour of their families, not merely by charitable benevolence but by planning. Unlike the well-known Monte delle Doti in Florence, which underwrote the marriage arrangements of the élite, and unlike the many charitable funds which, across Italy, dispensed dotal bequests, the Monte of Matrimony was tailored to give the respectable poor themselves an opportunity to invest, at interest, their own savings. Parents, relatives and would-be sponsors were invited to plan ahead by opening accounts for daughters and needy girls in order to provide a dowry at a lower cost: the Monte would manage the investment and pay the dowry when the beneficiary would claim it. Helping fathers to dower their daughters the Monte worked to shore up the endangered pillar of early modern Italian society, the family, where it was weakest, i.e. among the urban lower classes. While the fund could not prevent the deterioration of the economic and social standing of the lower strata of Bolognese population, it acted as a powerful stabilising force. 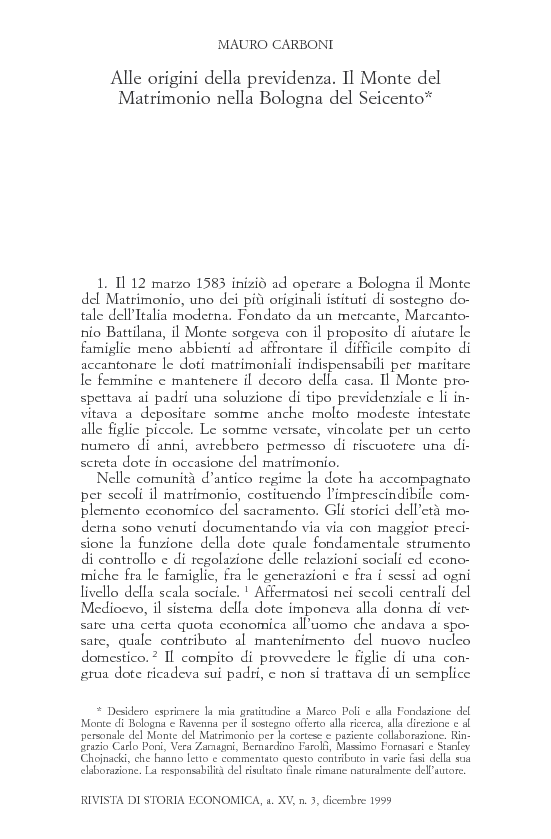