Many Italian industrialists were deeply unsatisfied with trade treaties of 1904-1906. They blamed tariff reductions and, above all, the most favoured nation clause. In 1910 the two greatest industrialist associations were founded: Confindustria and Assonime. The grip of some home-market oriented industrial sectors, like steel-making or sugar industry, on these associations was remarkable. As a result, both the associations had clear protectionist tendencies. In 1913 an official Tariff Commission was nominated to reform the existing tariff. Assonime, with the support of Confindustria, created a special Committee in order to influence the making of the tariff. The Committee worked through successive filters. Single-branch associations had the task to collect and select members' requests. Then data were sent to Committee's secretariat which "harmonized" them to prevent contrasts and disputes from leaking out. Industrialists' aim was to get a multiple autonomous tariff, like the French one. When, in 1917, the Tariff Commission suggested to adopt autonomous system, industrialist associations seemed to win the game. Several factors were instrumental to this first success: the sharing of members between Commission and Committee, the cohesion of industrialists' front, the failure of official researches. Yet strong complaints and remostrances from free-traders and Southern agriculturists stopped every parliamentary decision about the new tariff. In the post-war period politicians' main solicitudes were to avoid tension between agriculturists and industrialists from exploding. Provisory solutions were so adopted until the new tariff was issued by decree-law in 1921. But also the new tariff was a compromise solution: it was a conventional tariff, very detailed compared to the previous one and its majoration coefficients could be modified by Government without parliamentary authorisation. The period from 1921 to 1923, when the tariff was approved by the Chamber of Deputies, was full of great political and economic upheavals. The crisis of heavy industries and vertically integrated sectors (like shipbuilding and blast-furnace steelmaking) deeply modified Italian industrial structure and the leadership inside the industrialists associations. In this new situation, fascist economic liberalism did not oppose but, on the contrary, complied with the needs of new leading sectors. 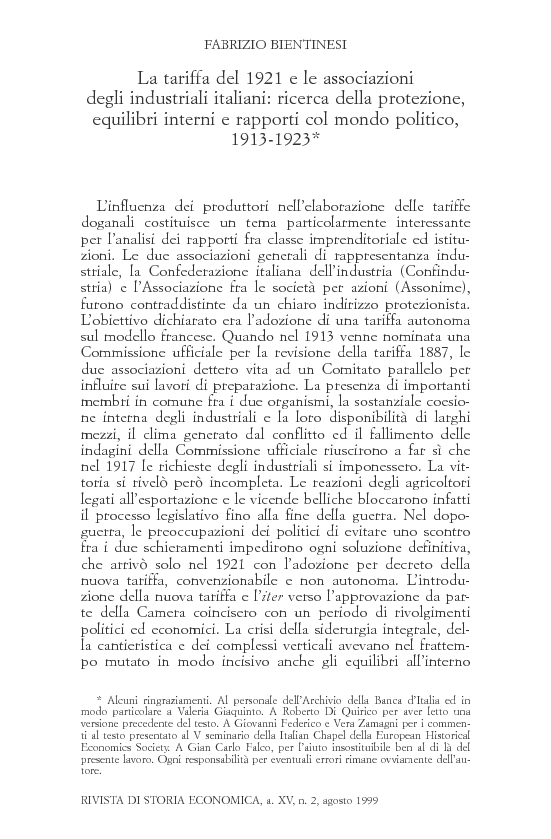