Thanks about five thousand texts of the XV-XIV century BC found in the provincial center of Nuzi, not far from Kirkuk, south of Little Zab east of the Tigris, the life of the small kingdom of Arrapha, vassal of the kingdom of Mittani, was reconstructed. Through the organization of the texts according public and private archives, it was possible to analyze the economic and social situation (divided into at least seven classes) of the small state in a systematic way. About the general, economic aspects, if the data concerning the Temple administration are meagre, the palace of Nuzi, that was not the 'Palace' of a capital, is an interesting example of provincial administration, interested in direct production activities, as owner of fields and flocks, in processing activities (through artisans and workers in its service), collection and distribution of goods. It was equipped with its own staff and was involved in the collection of taxes and forwarding them to the capital. Another element taken into consideration is the archive of the prince ilwa-teup, which is the working model of a large property. In it, the economic activities, strictly linked to social status of ilwa-teup, were diversified: activities related to agriculture, livestock, business, including loans with or without interest; preparation and storage of military equipment, or horse farm activities. The extremely complex organization of this large structure may be a useful model for understanding some aspects of the management of the Nuzi palace. As far as the agriculture, aspects relating to the ownership, possession or availability of land have been taken into account, with the analysis of so-called 'real-estate adoptions' ("t.uppi maru¯ti"). In this kind of contracts an 'adopter' yielded a portion of his land to an 'adopted' as a share of the inheritance, receiving in return a gift, in barley, silver or other assets. This is a type of contract that distinguishes Nuzi from other Near Eastern areas, although not unique to just the realm of Arrapha. This analysis has also taken into consideration agricultural production, breeding and processing activities ('industrial' and craft), documented by both rations and personnel lists in private and palace archives, where the names of many trades and professions are mentioned. Moreover, the archaeology offers the evidence of many high quality objects (glass, pearls, vases, etc.) found in the excavations of Nuzi. Since the reign of Arrapha is located on the crossing of two important trade routes, one from east to west and the other north to south, a major movement of goods affects it, both within and abroad. In the realm of Arrapha, as in other contemporary realities, there were forms of 'public' and private trade. Operationally, the pivot was the figure of the merchant (LÚ.DAM.GÀR = tamka¯ru), which can take on a dual role: the commercial agent for the palace and the private merchant. These aspects mainly concern metals (copper, tin, bronze, silver and gold), that were operated by the palace or large private archives, such as ilwa-teup's, and was funded by professional merchants; metals were entrusted to a responsible individual to achieve the artifacts required. Moreover, metals could be considered a material of high value for the security of the state, given that they were within the manufacture of weapons of offense and defense. 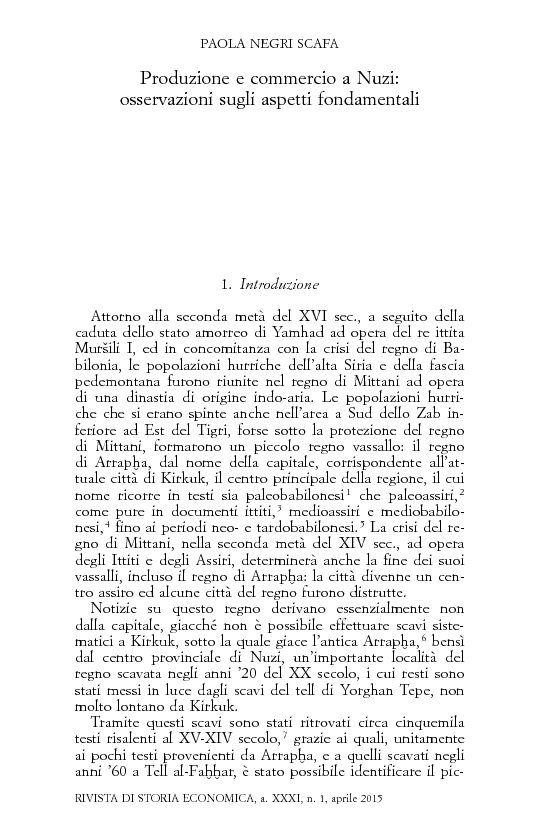