The Neo-Sumerian state went on for 108 years (2159-2052 BC) and comprised both a core and a territory called ma-da. The core included Southern Mesopotamia from Sippar (not far from modern Baghdad) down to the coast of the Persian Gulf to the South, and it was subdivided into about a dozen provinces, besides the political capitals Ur and Uruk and the religious centre of Nippur. The territory ma-da, which was wider than the core, served as a strategic buffer zone protecting the northeastern flank of the Neo-Sumerian State. The principal resources of the Neo-Sumerian economy were supplied by agricultural production. The main crops were barley, while emmer and wheat were considerably less widespread. Legumes, alliaceous plants and sesame constituted the most important vegetables. Besides agriculture, animal husbandry was the other main sector of Neo-Sumerian economy. Cattle provided dairy products, and sheep supplied also wool for textile production, what has to be considered as the most important industrial activity. The absence of raw materials in the alluvial plain implied that the Mesopotamians were always dependent on foreign import for their needs. Merchants traded metals, building stones, semiprecious stones, and woods, from the neighbor Iranian plateau, and other exotic goods reached Mesopotamia through the sea commerce in the Persian Gulf. The businesses of merchants included also «money» lending and tax collecting on behalf of the crown: it involved the use of silver. The economic organization of the core of the Neo-Sumerian state comprised three sectors: 1) the provincial sector controlled by the gover- nor; 2) the royal domain controlled by the «generals» or by members of the royal family; 3) the private sector, or non-institutional sector. The by far most abundant items of information come from the provincial sector, that, however, was probably less important than the royal sector, since almost the whole of the huge Neo-Sumerian documentation available to us was compiled by the archives of the temple households that belonged to the provincial sector. So, we have many data about the taxation delivered by this sector, and nearly nothing about that of two other sectors. The principal transfer of goods from the provinces to the central administration, by not at all the unique, was the system bala. Following this system, each province delivered the commodities, on whose production it was specialized, including the workforce, to the capital Ur or to central redistributive centers, according to its size and wealth, each delivery covering a period of the year. The vast region, defined as ma-da, or better the colonialists settled in it, supplied a personal income tax, consisting mainly in cattle and sheep, dependent on their military rank, and then on the size of their herds and flocks. 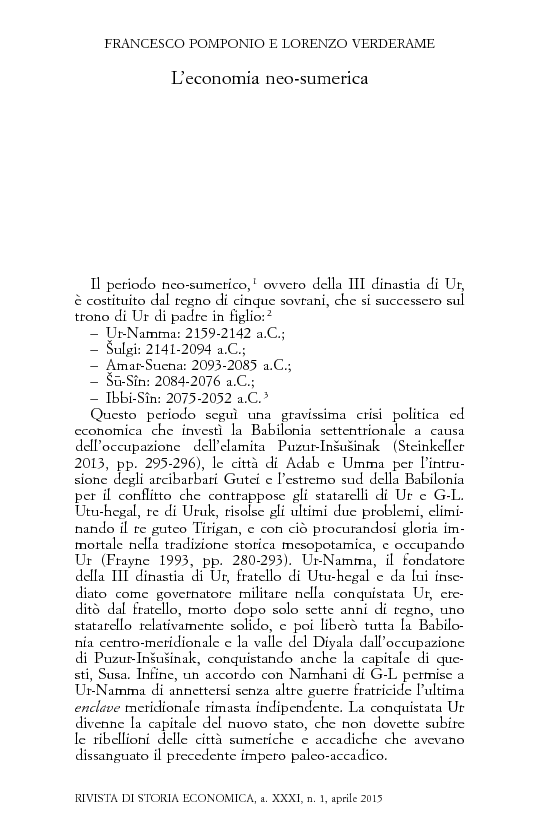