Convergence of GDP per capita is a traditional topics in the history of economic growth. The different research traditions advance different explanation for this phaenomenon, but all measure it in the same way - i.e. with the coefficient of variation - and find the same periodization: 1870-1913, convergence; 1918-1950, divergence; 1950-1973, strong convergence; 1973-1988, mild convergence. Only Williamson and O'Rourke evaluate convergence by wage per capita instead of GDP per capita. This essay evaluates the convergence of the OECD countries in the period 1870-1988 with "Markov chains" instead of the traditional "sigma" convergence. According to this we draw three main conclusions. The first one concerns the convergence observed in different periods. The first period (1870-1914) does not show any convergence as in the conventional wisdom, while the interwars period shows convergence as in the "Golden Age", which is absent also in the last period. This means, secondly, that the direct relation usually established between "globalization" (i.e., free circulation of goods and factors of production) and convergence is at least weak. The third conclusion derives from the internal dynamics of the transition matrix. They are similar for the first and the last period and for the interwars period and the "Golden Age". We suggest "technological waves" as a good candidate for explanation. This is in fact coherent with the distributions observed, where intermediate states show a good probability to catch up or forging ahead, while the leading ones and the poorest have more probabilities to remain in their actual position. These means that intermediate states have the major chances to move up or down during "Industrial Revolutions", while leaders and low wage countries have not. 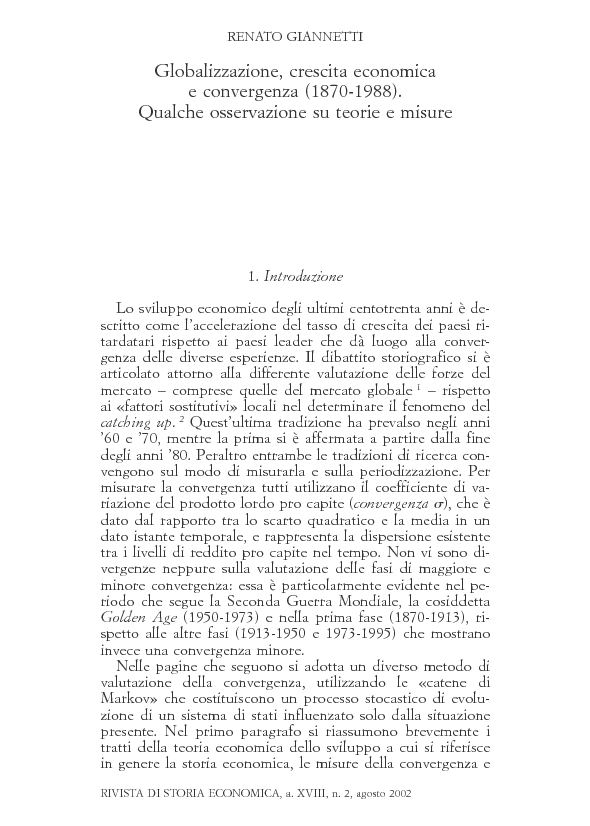