This contribution deals with the use of silver as currency in Assyria in the light of the Neo-Assyrian textual evidence. The article is divided into three main parts. After a reconsideration of a much-debated passage in Sennacherib's inscriptions which has been taken in the past as evidence for the existence of coinage in the Neo-Assyrian empire, the first part gives an introductory view on the use of metals as money in Assyria, the progressive adoption of silver as currency during the 8th and 7th centuries BC, and the three weight standards which were employed in payments in silver, i.e. the King's mina, the mina of Karkemi, and the merchant's mina. The analysis also considers the results of Sargon II's successful military campaigns in the north-western regions, especially in Karkemi, as the political and economic factor which determined the adoption of silver as the preferred metal used as currency. A complete list of the attestations of these three silver standards in the Neo-Assyrian legal texts and an evaluation of the areal distribution of these different types of mina in the central and peripheral sites of the Assyrian empire concludes this section (§ I). The second part presents a chronological classification of the attestations of the use of the three silver standards on the basis of the dated legal texts coming from the main Neo-Assyrian archives (Nineveh, Kaliu, and Assur) (§ II). The third part of the paper is concerned with the payments in silver and the variation of prices. The inquiry has been limited to the sale transactions attested in the legal archive of Nineveh. The purchase documents taken into account concern slaves, land, houses, livestock, and the overwhelming majority of them dates back to the reigns of Sennacherib, Esarhaddon, and Assurbanipal. The data about the nature of the purchased goods and their prices in silver are displayed through three tables, ordered by type of mina used in payments and by chronology of the texts. Finally, a few observations are made on the fluctuations of prices per individual unit of slaves, skiller labour, and houses as well as on the possible relationship between the determination and variation of the price of a given item and the type of silver standard in use in the transaction (§ III). 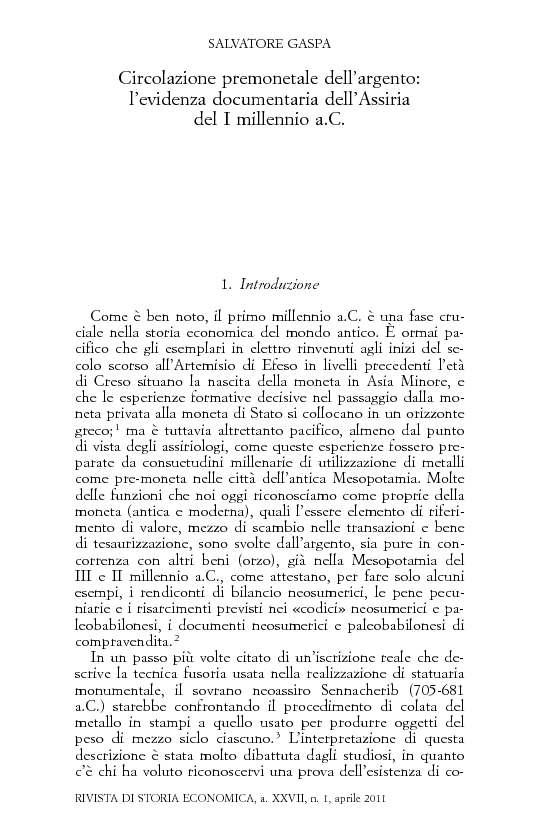