In this paper a new estimate of the value added of the Italian regions in 1891 and 1911 is offered. The methodology is the same of a previous work referring to 1938 and 1951 [RSE XXI, 1]. For the industry and the tertiary sector, it consists in dividing the new national figures by the regional employment, then in revising this first set of data according to the available estimates of income per-worker, in order to consider differences in regional productivity; in doing so, I have made use of a very wide range of sources, wider than even before: population censuses of 1881, 1901 and 1911, industrial census of 1911, Ellena's industrial census of 1876, beside various other more specifical statistical sources. In the case of agriculture, regional value added has been obtained more directly from the Federico's estimates of the regional marketable gross production. The results have been discussed while being compared with the previous estimates by other authors (Esposto, Fenoaltea, Zamagni), and with my estimates for 1938 and 1951. To offer a more comprehensive view of the Italian regional development, I have also built two indices of the Italian regional inequality in the long run (1891-1971), and made a comparison with the Spanish case. Broadly speaking, between 1891 and 1911 the North-South divide is widening, but not so much as one would expect. Indeed in Southern Italy the most backwards regions improved their per-capita ranking, probably thanks to the huge migration of the time, while the most developed ones (Campania, Apulia, Sicily) lost their ground. The North-South divide widened much more in the following decades (1911-1951), while at the same time in Southern Italy the process of interregional income levelling was going on. As a result, it is only by the end of World War II that we have the picture of a backward and quite even "Mezzogiorno", more consistent with traditional literature. 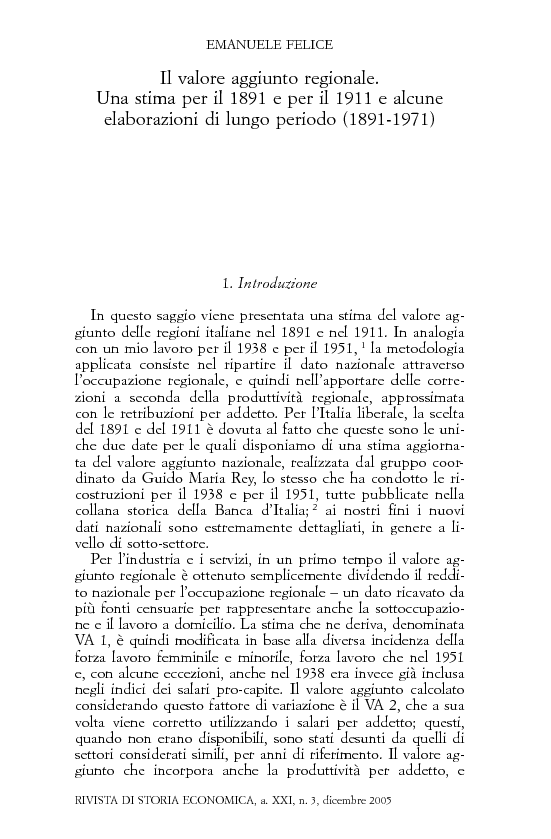