In this paper we take up a theme that Berg has explored at considerable length in her work, especially in her Age of Manufacturers and in her 2007 essay in History of Science. In that work she emphasized the crucial importance of skilled artisans to the Industrial Revolution, a theme that has also been pursued by many other scholars such as John R. Harris, and in France by Liliane Hilaire-Perez. We propose to expand this theme by looking at the evidence for and causes of an artisanal gap between Britain and its Continental competitors in the period before the Industrial Revolution as well as the years 1760-1830. We argue that the sources of British advantage – widely reported by contemporary travelers and political economists – are to be sought in three main areas. First, the quality of the labor pool from which these workers came was higher in Britain that elsewhere. Workers were more skilled and able because they were healthier, stronger, had probably better cognitive skills, and above all were better trained in a more flexible and open apprenticeship system. Second, British geography and specialization provided Rosenbergian «focusing devices» that stimulated innovations that turned out to be particularly useful in the Industrial Revolution. This was especially true for coal-mining, iron-making, and shipping, which posed many of the stark technological challenges that were resolved before and during the Industrial Revolution. Britain’s strength in watch-, clock-, and instrument making spilled over to the new machinery that made the Industrial Revolution. Third, the growth of internal economic integration and population growth created the economic stimuli to invest in high skills. The argument does not entail that the growth of science and scientific methods did not matter, as many have argued. Indeed, we argue that there was a profound complementarity between the two and that it was the confluence of applied natural philosophy and practical mathematics with the dexterity and skills of British workmen that explains the precocity of British Industry 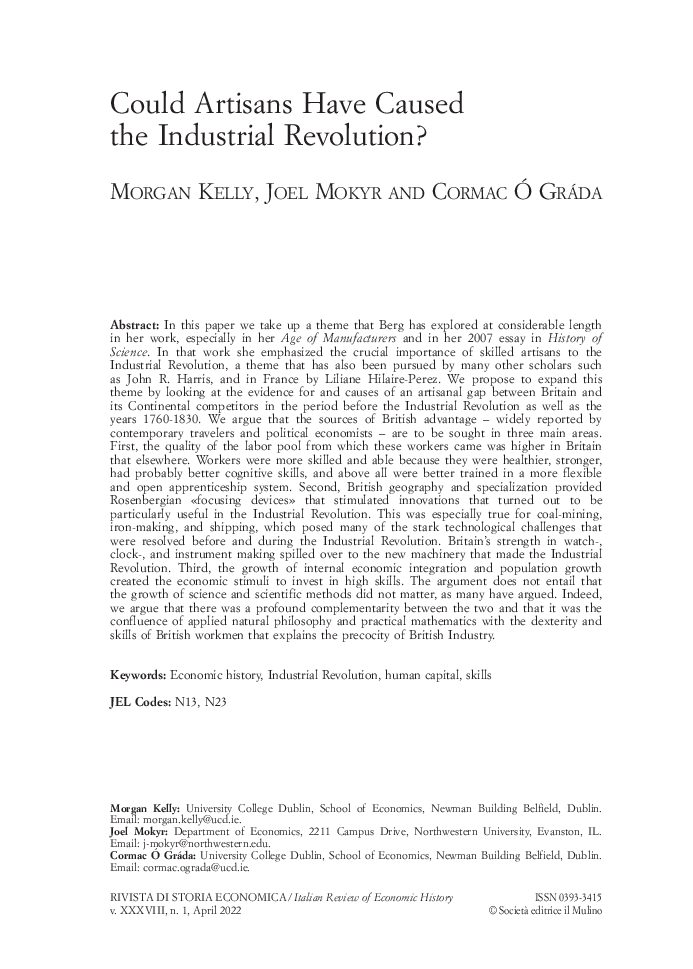