Historiography has often narrated Soviet history along its individual leaderships, from Lenin to Gorbachev. In this narrative, the Second World War appeared like a (albeit catastrophic) anomaly, after which Stalinism resumed almost unchanged until the dictator’s demise. When Nikita Khrushchev took over in the mid-Fifties, as the story goes, he introduced widespread social reforms to redeem the Soviet regime from Stalin’s crimes and to consolidate his power. As research has shown, this narrative obliterates the impact of the war on social developments and policies in the USSR. One the one hand, the Second World War was a game changer for social policy in the Soviet Union: the war deaths and devastations, as well as the new international role of the Union as victorious global player forced the leadership’s hand in designing social reforms to improve the population’s living conditions. Many of Khrushchev’s far-reaching reforms thus originated in the immediate post-war context. On the other hand, the rationale behind late Soviet social welfare (as designed in the Fifties) had direct precedents in wartime reactions to social destitution. This article traces these causalities and continuities using the example of Soviet child welfare, and shows that while the war indeed triggered far-reaching social welfare reforms, the Soviet leadership – in direct continuity from Soviet wartime governance – continued to prioritize public order over social welfare, to obscure the existence of social problems, and to outsource large parts of social welfare work to activist organizations. With a heavy wartime heritage, the post-Stalinist Soviet state used social welfare as a means to align people, to fight deviance, and marginalize those who did not fit in. 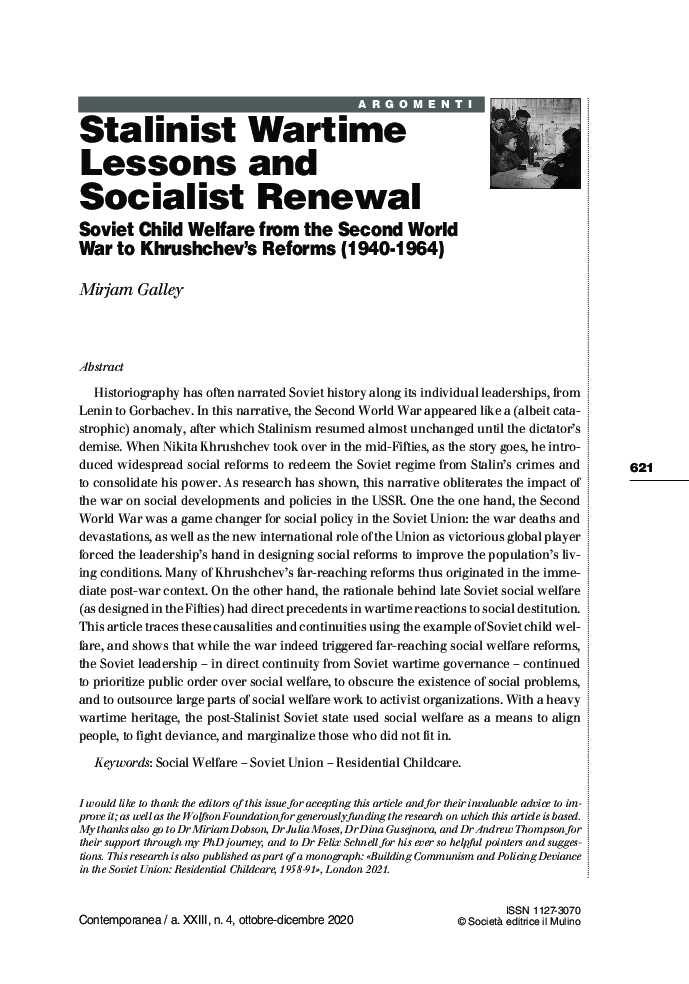