This article develops around the correspondence and the meeting (in the Abbey of Gethsemani in October 1964) between the two Catholic pacifists, starting from a study of documents preserved in the archive of the Giorgio La Pira Foundation in Florence and in the Thomas Merton Center. The article try to emphasize a strategic approach to the debate around the Cold War and the evolution of the nuclear race. The inclusion of the unpublished letter of La Pira to Bob Kennedy is important to understand the terms of his dialogue at a distance with Merton, because the major of Florence hoped that the democratic politician would become a political interlocutor sensible to the pacifist proposals of Merton. The evolution of the dialogue at a distance between La Pira and Merton was based on the prospect of a new form of Catholic mobilization for peace in the tight but changing meshes of the Cold War. The strange mixture of evangelical and political language used in this letters, which often generated criticism of Lapirian diplomatic initiatives, found in Merton a careful reader. Conversely, the Trappist monk began to represent a sort of ideal North American reference point (and not only in spiritual terms) in the new Lapirian geopolitics of the Sixties, in the years of the of the launch of the flexible response strategy by the US government. In particular, a series of theoretical reflections on the nature of the nuclear race and the Cold War would have intertwined with the explosion of the Vietnamese conflict, the US intervention in Santo Domingo and the sudden end of the administrative experience of La Pira. 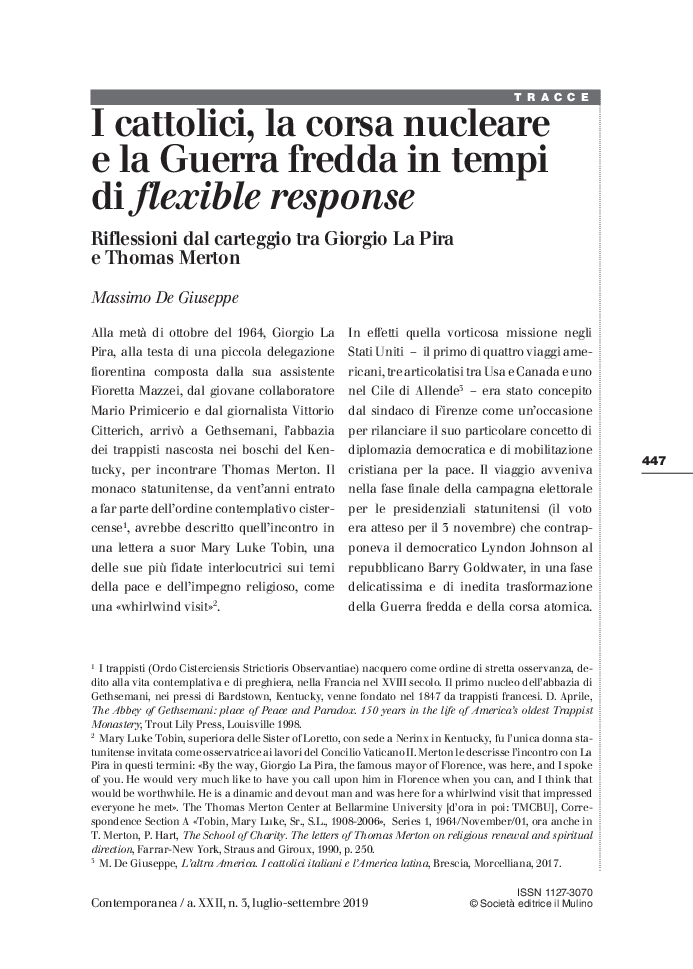