Under fascism, many teachers, academics and scholars who had been defined «incompatible» with the regime for political or «racial» reasons left Italy. This essay shifts the focus from cases of professors who were already well known at the time, to those who represented the future of Italian science and university life, the young scholars who were expelled in an almost invisible way. How did their experiences of intellectual migration echo in the scientific community they belonged to, and how in the host community? What have been the consequences in the sciences and professions? And in the experience of migration to the United States what was the impact of being a woman, an Italian, a Jew and an intellectual looking for a qualified job? The case study is a female scholar of psychology, graduated in Florence - an antifascist close to Gaetano Salvemini and Nino Levi - who migrated alone to New York in 1939 and never came back to Italy. What obstacles did Calabresi encounter during her career in Italy? What prejudices did she have to face and what aid did she receive, in the course of this long journey of Americanization? She was at the New School for Social Research in New York and she only got a good position as a clinical psychologist a full ten years after her arrival in the US. Her troubled case allows us to look also, in a comparative manner, at the changes of a young, problematic discipline and profession, that was increasingly feminized. (In Italy academic psychology was established in 1905 and declined during fascism; it obtained professional recognition only in 1989; in Germany it was recognized in 1941.) Renata Calabresi was the only Italian woman who had a grant through the Emergency Committee in the Aid of Foreign Displaced Scholars (that collected around 6.000 applications); but in Italian academic circle she was «forgotten» like many other displaced scholars. 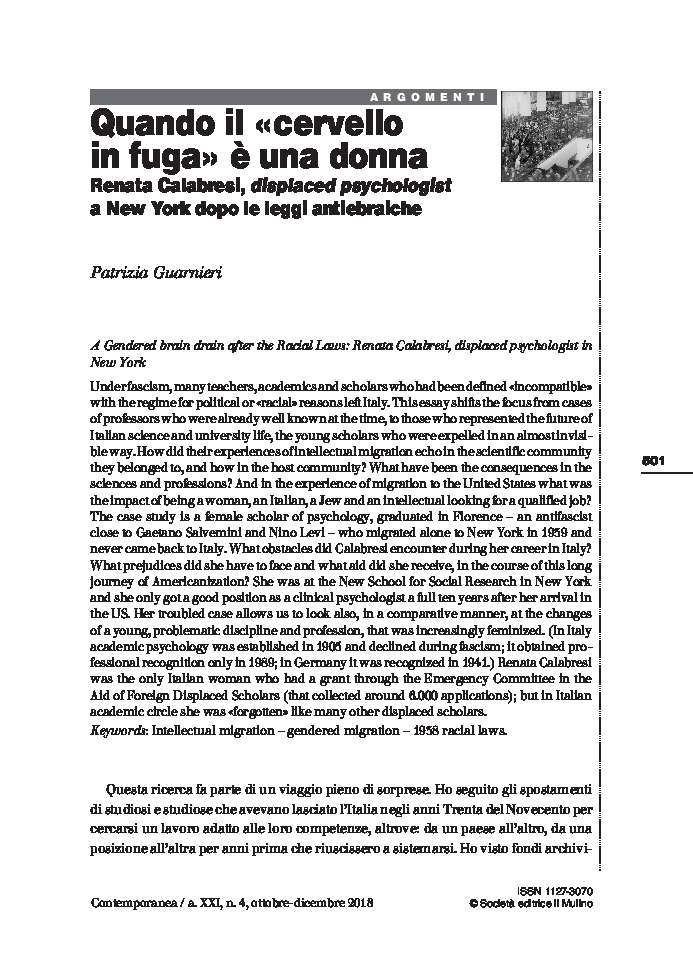