In August 1935, Aldo Castellani, one of the most renowned Italian tropicalists, was appointed High Adviser for the East African Colonies, tasked with the organization of the health system of the Ethiopian expedition. In line with the vast deployment of forces envisaged by the regime for the conduct of the conflict, Castellani took advantage of a large number of medical officers and technological means, establishing a highly rationalized organization of the health service. This allowed to safeguard the Italian-Ethiopian war from the scourge of all colonial expeditions: the high mortality rate caused by disease spreading among the military corps. Entrusted with the sanitary protection of a wide portion of white population, Castellani offered his experience of physician, holding a new position in the Italian military organization system. The role played by the Italian doctor in the Ethiopian campaign and the nature of his expertise sheds light on the relationship between medicine and war. This issue has hardly been dealt with by historiography, which has left unchanged the idea – subject to critical review in other fields of study – that war constitutes a factor of advancement and «acceleration» of medical science. 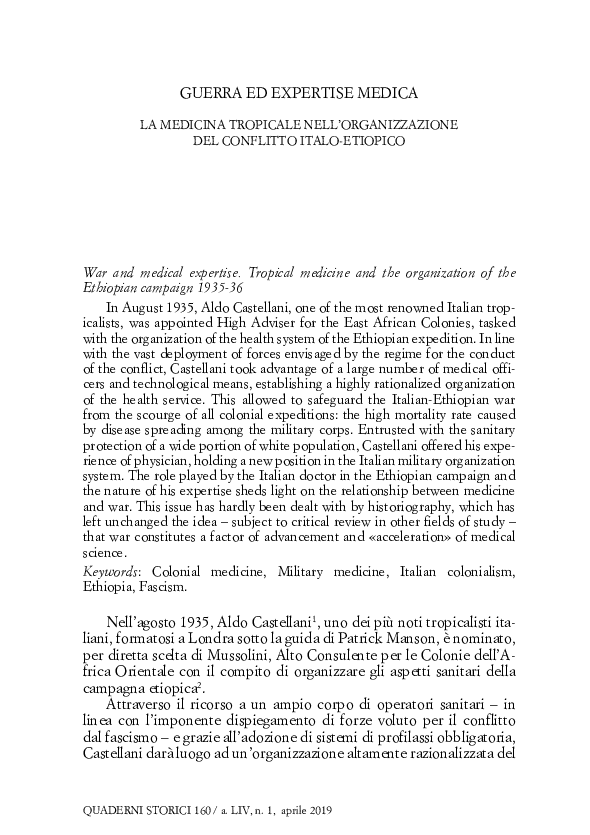