This paper focuses on the practices of belonging in the Italian community within Tunisia during the last years of the nineteenth century. Following the French invasion of the Regency in 1881, some Italians had a conflicting relation with the new colonial rule. In 1896, while international conventions reconciled the relations between France and Italy, the local upper-class was bitterly disappointed by a treaty that recognized the French rule in the Regency. This disappointment revealed a strong national sentiment in some members of the Italian upper-class in Tunisia. What were the reasons for such a feeling? In 1898, a law for the registration of the foreigners in Tunisia brought out the social differences within the Italian community. Some notables, supported by consular institution, sought to present the Italians in Tunisia as a united and homogeneous national group. On the one hand, social differences revealed the asymmetry within the Italian citizenship between the upper and the lower class. On the other hand, the condition of extraterritoriality limited by international conventions created a space of agency for Italian nationals. This condition could be used by those who presented themselves as harassed by the French authorities for their Italian national belonging, making the Italian citizenship in colonial Tunisia a strategic tool for personal agency. 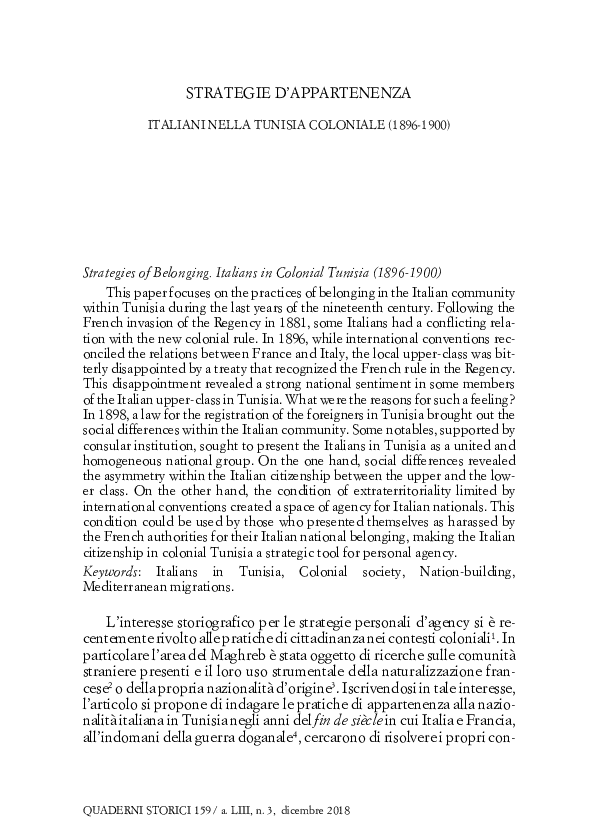