At the beginning of the 17th century, the Tuscan port of Livorno was a new city open to foreign merchants and an important place of Mediterranean corsairing. This article shows how Livorno's churches were shaped by the intensive conflicts and exchanges between Tuscany and Ottoman North Africa. First, it analyses the episode of the construction of the Chiesa della Madonna, after the Knights of St. Stephen seized at sea a small wooden statue considered miraculous. Rivalries between lay confraternities and Franciscan brothers over the possession of the object provide information on local devotional practices and, more broadly, on the social composition of the commercial elites of the port city. The article then focuses on the history of the foundation of the altar of St. John the Evangelist in the church of the Madonna - also known as the «Altar of the Corsicans». This altar was not, however, that of the entire Corsican nation, but belonged to four related merchants from Cap Corse, enriched by maritime trade with Algiers and Tunis. The foundation of the altar thus allowed the four patrons to return a part of the profits earned through their good relations with Muslim merchants, profits that contributed to the embellishment of the new city. This altar was a means for these four Corsican merchants to claim their noble status and their membership of an emerging municipal elite. 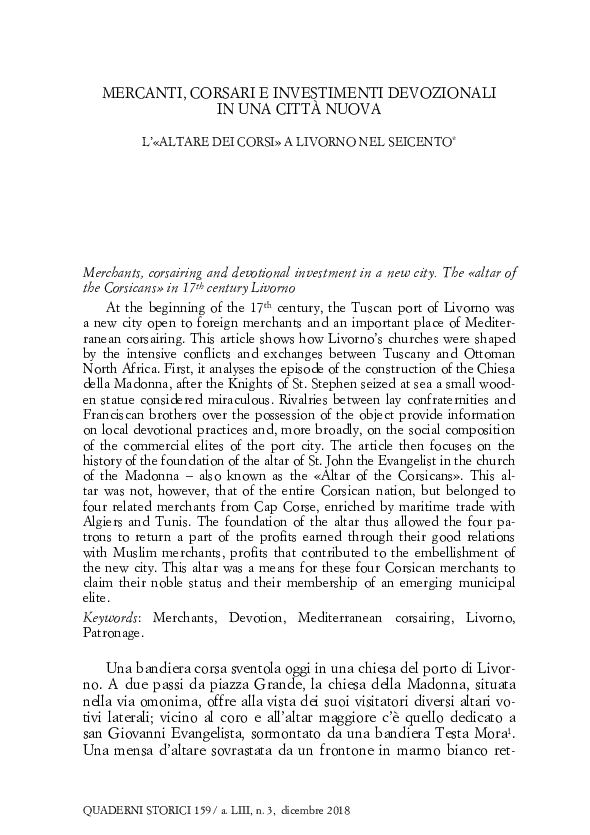