This essay examines a group of "pamphlets", published in the State of Milan between the years of 1746 and 1751 by a group of medical practitioners and a priest, who dealt (by request of the bishop of Cremona) with the case of a young virgin exhibiting unusual symptoms. These had long been believed to be of preternatural or miraculous origin, and were thought by her confessor to be the symptoms of diabolical possession (or diabolical temptation on the road to potential holiness) and were treated as such through a series of exorcisms. The essay investigates the reasons why this group of consultants flatly refused both the hypothesis of possession and the therapy of exorcism, once the normal course to be adopted when confronted with such symptoms. It retraces some of the sources of this change, underlining various influences: discoveries excluding spontaneous generation; the effects of Cartesian physiology and anatomical research, that revolutionized the older theories of the relationships between the soul, brain, and nervous system; the momentous changes in the policies of the Roman Curia and the Holy Office in the period between 1680 and 1710, when war, political change and the new influence of French theological schools suggested a partial revision of the definition of miracles, true holiness and diabolical possession. 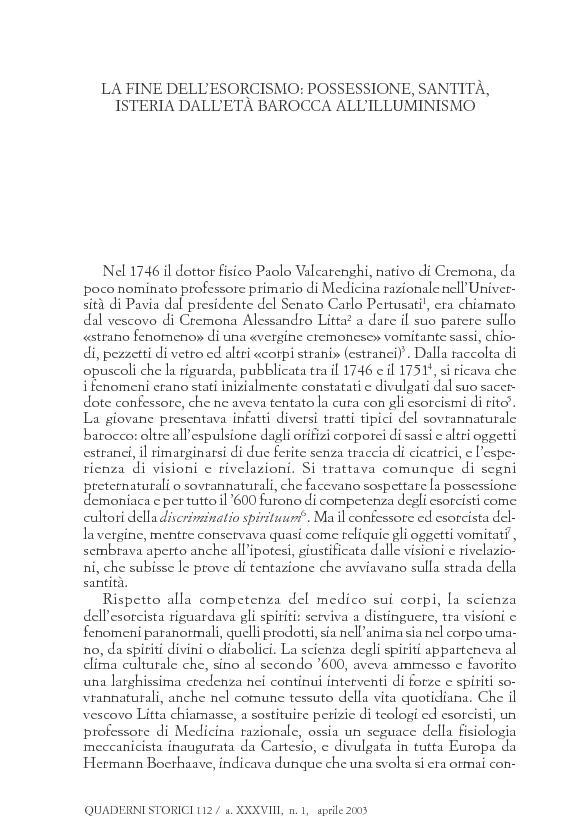