Rarely could real estate property that belonged to an entail circulate on the market. That property was obliged to pass from generation to generation according to the order established by the founder of the entail, who forbade the sale of any such property. The Republic of Venice, ruled by patricians who often made recourse to entrails, normally impose the respect of this rule. However, it also devised a complex procedure and outlined the conditions for lifting the inalienability clause. This article is a case study of the Venier Palace in the parish of San Vio, in the Venice neighborhood of Dorsoduro, during the seventeenth and eighteenth centuries. It show that the existence of several entails belonging to various families was an obstacle neither to the change of property rights (both free or inalienable) nor to the legal sale of real estate properties via permutation and preemption rather than via the market. Even large-scale reconstruction was initiated, although it ended because of lack of financing means. In short, I argue that entails were not sanctuaries for property but rather valuable refuges. Shifting the attention away from the testamentary will and toward the management of entails, this article demonstrates how flexible this inheritance practice in fact was. In so doing, it also downplays the symbolic role played by palaces in the self-image of the Venetian patrician and highlights how the ruling class and the heirs both regarded the assets' value and preservation as more important to the integrity of the assets' material continuity. 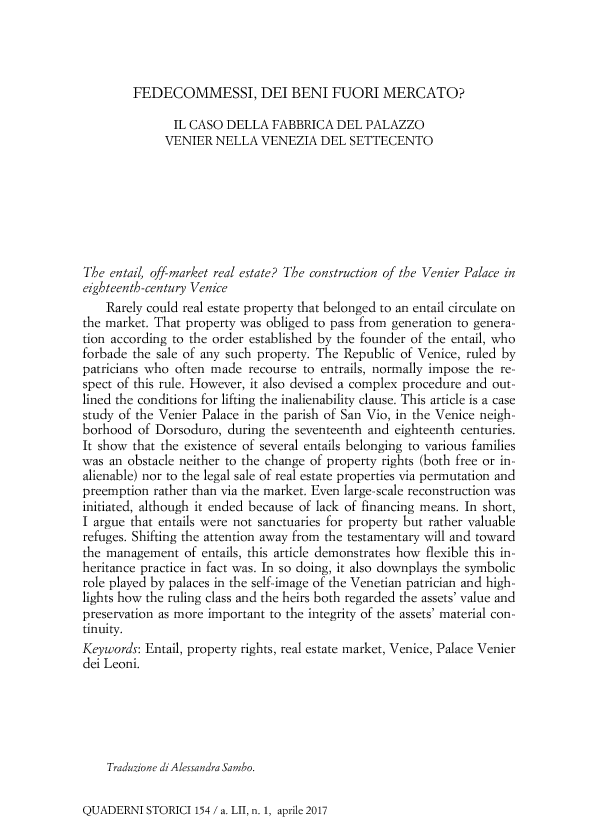