When dealing with Ottoman judicial authorities, Frankish merchants, diplomats, and even slaves encountered unexpected difficulties. One of the obstacles these foreigners came up against was the Ottoman witness system, privileging the word of Muslims, and more generally, Islamic notions of proof and evidence. In this article I report the story of a Venetian who fell bankrupt in Syria in the 1520s, and analyze how his default was dealt with by Ottoman judges. A trader in diamonds and luxury items, Marco Priuli's heirs and associates proved to be unfamiliar with the legal practices sponsored by the Ottomans, and with the court's requirements for proof and evidence. By approaching Priuli's case, I describe how, shortly after the Ottoman conquest of Syria and Egypt, judges and officials started to deviate from previous legal practice regarding non-Muslims and mixed cases, promoting their own practices for producing evidence. For the Ottomans, the new approach to proof and evidence served as a means to differentiate themselves as a political community, and to mark out their vision of the Ottoman sovereign as guarantor of the rule of law. 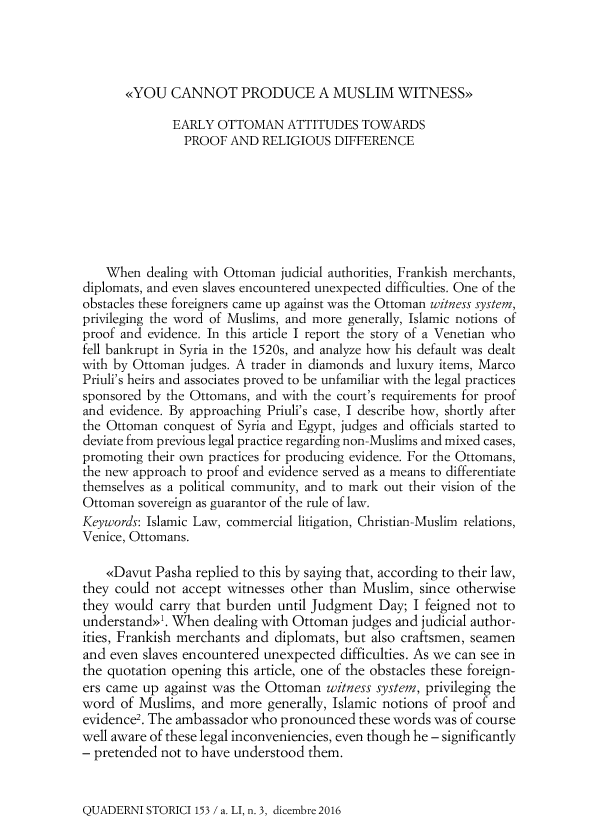