This paper uses professional brewing journals from the United States, Britain, and Germany in order to understand the construction of a particular variety of lager beer as a global standard. During the nineteenth and twentieth centuries, European beer traveled the world through circuits of trade, migration, and colonialism. In doing so, it came to be associated with a global version of consumer culture. Informed by Bruno Latour, George Marcus, and Elizabeth Zanoni, this paper examines intellectual, professional, and market exchanges between brewers in different countries as well as the debates over production techniques and taste that accompanied the evolution of brewing over this period. It seeks to incorporate notions of mobility studies, particularly the relationship of things that travel with things that stay rooted, to see the connections between global commodity chains, itinerant brewers, migrant populations, and ideals of localism over the course of two centuries. It concludes that cosmopolitan brewers attempted to claim distinctive national styles during a period of international rivalry on the eve of World War I, notwithstanding the increasing convergence of their products toward the homogenized tastes that the craft movement would later decry: light, clear beverages that were low in body and alcohol. 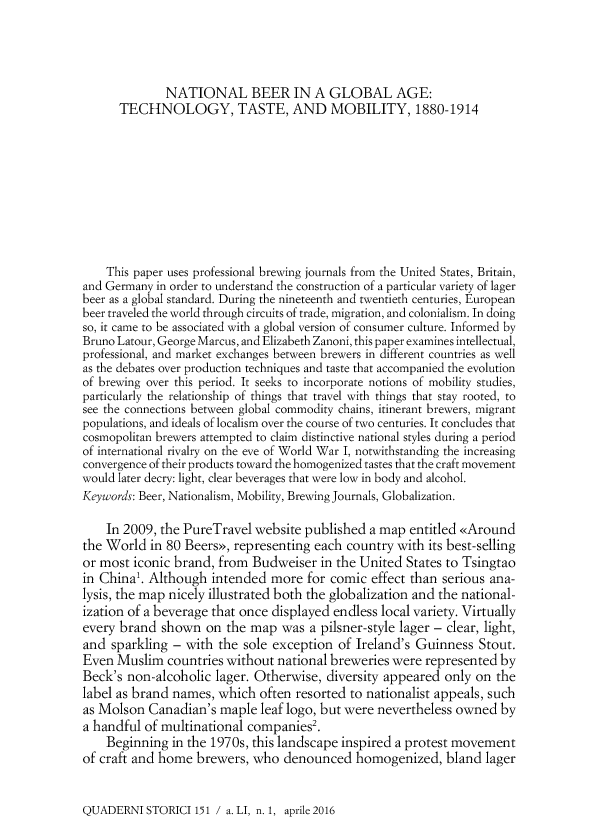