Food mattered a great deal in Jewish history and in particular the reality that they adhered to a deeply embedded religious system which restricted what they could eat and with whom shaped their lives wherever they found themselves. Their relationship to food became complicated in two particular ways. Most Jews, for centuries, had made a living in itinerant trade, and they constantly had to deal with the need to procure for themselves ritually appropriate, that is, kosher food. So too food loomed large in the many migrations which defined their history, from the beginning of the Common Era and beyond. But the great Jewish migration of the long nineteenth century which brought about one-third of Europe's Jews to the new world, primarily to the United States, profoundly challenged their ability to obtain kosher food. In particular, the millions of Jewish men who as immigrants to new lands ventured out into the hinterlands as peddlers faced a food crisis. Wherever they went as peddlers they operated on a weekly basis and five nights out of seven had to sleep in their customers' homes, exposing them to the problem of what to eat. How they solved the dilemma between embracing the hospitality they found and the fact that none of their customers, all non-Jews, knew about "kashrut", reflected much about their patterns of integration in their migration destination homes. 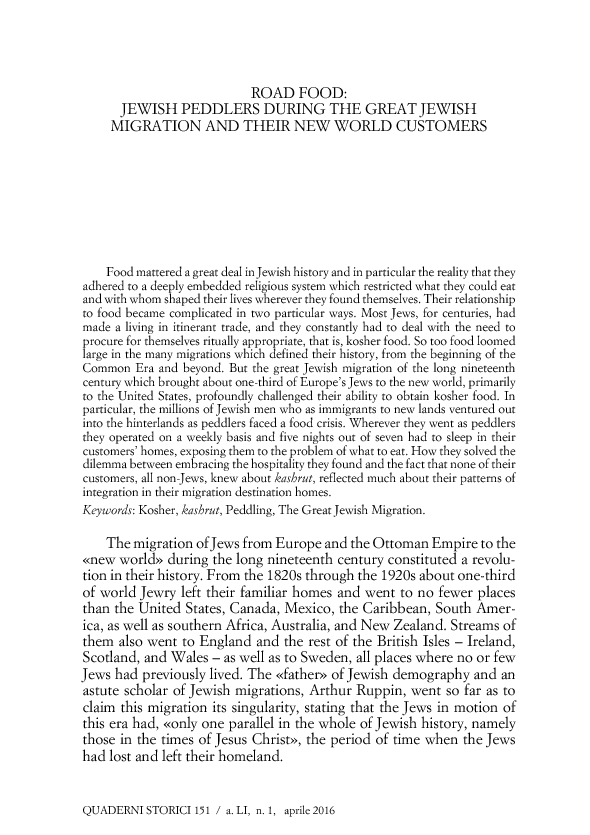