The city is not just an urban landscape, a geographical site, or a catalog of housing problems and unplanned growth disasters. It is also a space constituted existentially by those who live in it and whose experiences it shapes. Adapting from Freud, I explore the experience of the urban unhomely as a condition of disturbance and estrangement in Mumbai, and ask how its subaltern citizens cope with it. Focusing on Mumbai's experience during the last few decades but also keeping its longer colonial history in mind, I trace the collision of two opposing forces. On the one hand, we have strategies of survival, a subaltern urbanism that seeks to make the slum dwellers feel at home in the city. Ranged against it is a dominant urbanism, underwritten by social and historical forces, that invades, disturbs, and estranges the city as home for the slum dwellers. I analyze the history of this confrontation between the opposing forces to identify the nature of contemporary everyday tactics of survival practiced by subalterns. I argue that if such practices can be understood in terms of Partha Chatterjee's concept of political society, they also exceed it. I address «excessive» subaltern politics of survival in Mumbai. 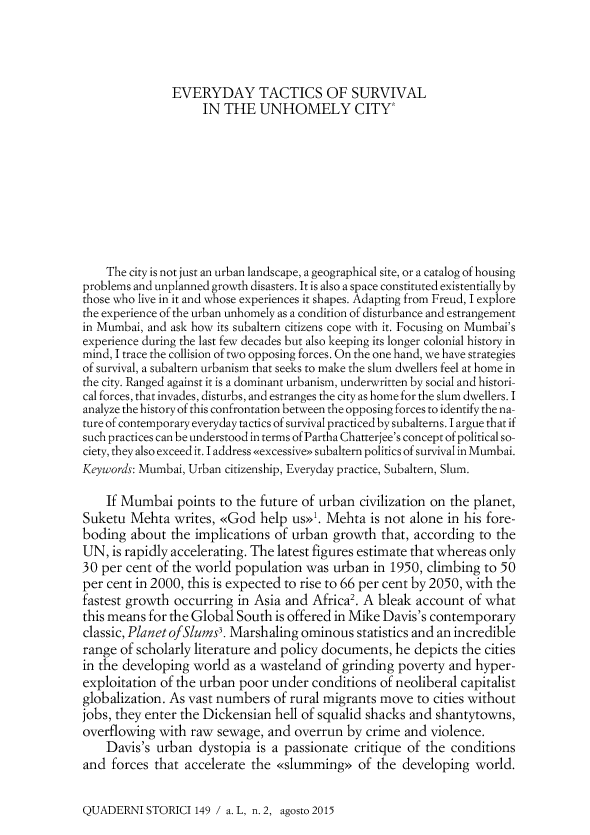