The comparative study of racial laws has fallen out of fashion since the early 1970s, when scholars agreed that material criteria, like economics and demography, made more of an impact on the lives of free and enslaved people of African descent than metropolitan religious or legal traditions. But this does not explain why slave societies with the same economic and demographic regimes developed different racial cultures. This comparative paper explores why Jamaica had a more relaxed set of racial codes than Saint-Domingue. In Britain's leading sugar colony, wealthy free families of color were eligible for special privileges that elevated their status above that of most free people of color, while in Saint-Domingue, after 1770, racial laws categorized even rich freeborn families of color as «affranchis» or «ex-slaves». The article argues that three factors contributed prominently to this difference. First, tensions between colonists and Versailles over military service and colonial loyalty created a crisis of imperial identity in Saint-Domingue after 1763 that did not exist in Jamaica. Second, there is evidence of greater social tension among whites in Saint-Domingue than in Jamaica. Finally elite men in Jamaica and Saint-Domingue worked with different legal institutions which influenced whether they would privilege social class or racial labels when dealing with the wealthiest free colored planters. 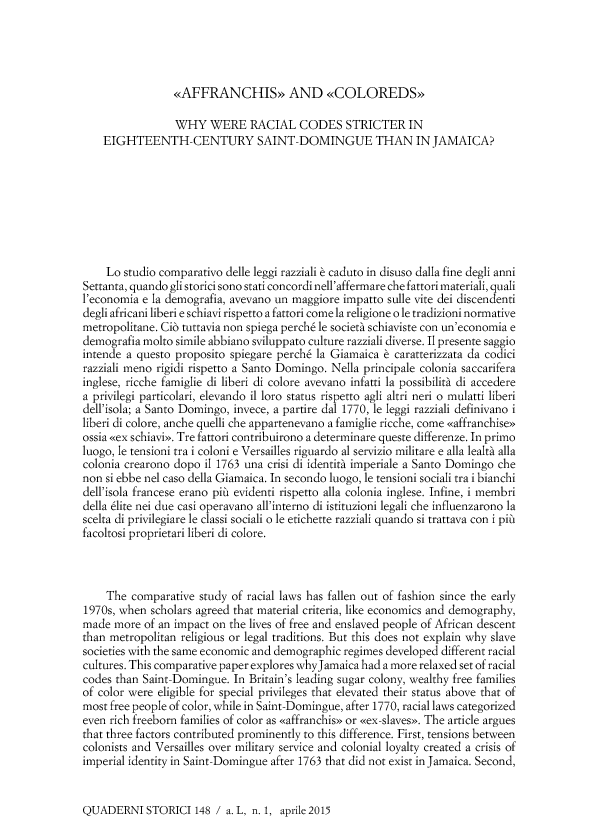