The article analyses the new theatre of justice that takes form between the nineteenth and twentieth century in the Assize Courts, in which the public was progressively distanced from the traditional places of capital executions, and was called instead to participate in the attribution of sentencing. This participation took place through the institution of the jury, or in the capacity of observers or witnesses within, or of, the judicial system. In particular, through the analysis of a case heard in Rome in 1879, it seeks to shed light on the role of discourses and penal practices in the construction of individual and gender identities, as witnessed by the definition of a national symbolic code, and by the formation of public opinion in the period immediately following the unification of Italy. The reconstruction underlines how the tribunals played a remarkable role in the formation and exercise of public opinion. One example of this was the abundant level of iconographic and discursive debate that developed from trials at the end of the 1800's. Such rampant talk was particular, in that its aim was to target and ridicule the women who were crowding into the courtrooms. This could be interpreted as an attempt to neutralise the active presence of women in the public field at a time when the rules of citizenship were being redefined. With regard to the assessment of the level of manipulation between the world of justice and the world of women in justice, the behaviour of the women protagonists in the trial examined here is analysed against the background of the new possibilities offered by the oral and public nature of the procedures, which heighten the corporeal dimensions of the accused. The interaction with the jury, with the spectating public, and with that decidedly larger public which was being kept informed at a rapid rate by the daily newspapers, put new lines of communication at the disposal of the various interpreters of the legal drama, which in turn served to define the threshold that separated the admissable from the scandalous, the acceptable from the unacceptable, the normal from the abnormal, and the woman who was guilty from the woman who was innocent. 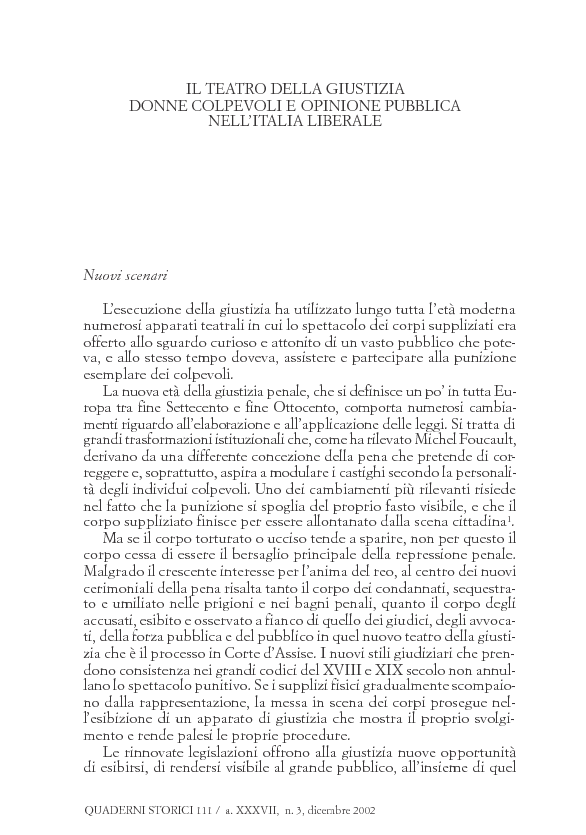