This essay discusses the topic of fraud linked to the prizes taken by corsairs in the Mediterranean during the period of the Continental Blockade, from the viewpoint of the Kingdom of Sicily, where the Bourbon court was sheltering under the English protectorate. The Tribunale delle prede (1808-1813) judged the legitimacy of the prizes taken by armed Sicilian corsair vessels from ships flying enemy or neutral flags, in a complex juridical framework which also involved the Health and Police authorities, at a time when in the rest of Europe similar institutions were being created. The documents produced by the Tribunale offer a penetrating insight into the dynamics of the fraud and into the practices, set up by the parties involved (judges, ship-owners, corsair captains and crews, merchants, buyers, consuls and official port authorities) which governed the capture, commercialization and evaluation of the prizes. The economy of fraud was not in conflict with the regular economy, but rather a part of it. Corsairing, for its institutional, juridical, diplomatic, political and economic aspects, became a paradigm of commerce, protected by the country of origin and hostile to rivals; and fraud was just one of its possible options. 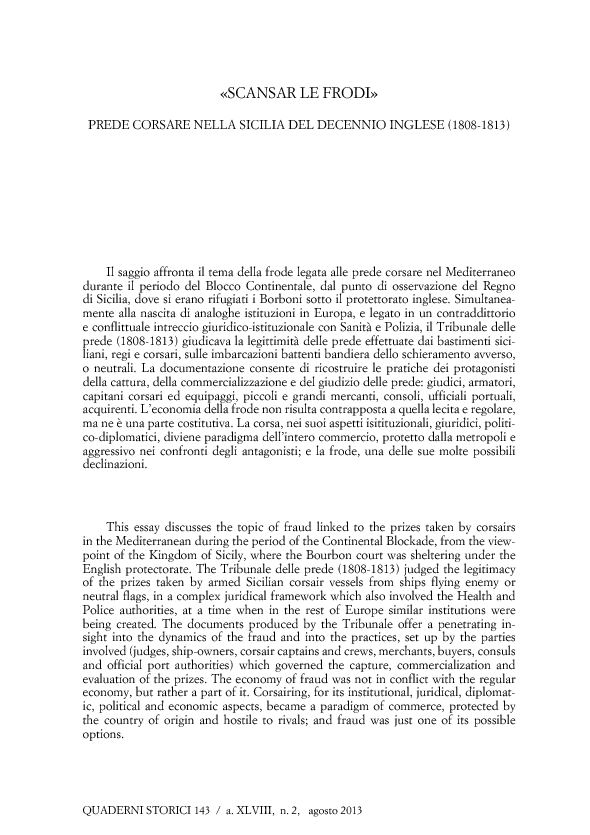