This paper reconstructs the history of the Shaw scholarship, set up at the LSE in 1904 by Charlotte Payne Townshend Shaw (1857-1943), a leading member of the Fabian Women's Group, and the wife of George Bernard Shaw. The scholarship offered financial support to a LSE student for the writing of a historical monograph. Initially all LSE students, either male or female, were equally eligible; but in 1911, after that for several years in a row the scholarship had been carried off by young men, Charlotte Shaw decided that it should be limited exclusively to female students - a striking case of "affirmative action" before the times. Moreover, Mrs. Shaw specified that the subject of research was going to be "the social and economic position of women in England at some period before the Industrial Revolution". An open scholarship was thus turned into one for women only, and for research on women's history. Among the winners of the Shaw scholarship were Eileen Power and Alice Clark, authors of some of the first classics in women's history, such as Power's "Medieval English Nunneries" (1922) and Clark's "Working Life of Women in the Seventeenth Century" (1919), both the product of research undertaken thanks to the scholarship. It can thus be argued that women's history as a new historical field developed in England thanks to the Shaw scholarship and in the progressive environment of a new university, the LSE. Drawing on materials from the LSE archives and from the Shaw Papers in the British Library, this paper focuses on the Shaw scholarship as an important and hitherto neglected chapter in the development of women's history in England, as well as a significant aspect of the cultural history of the LSE. 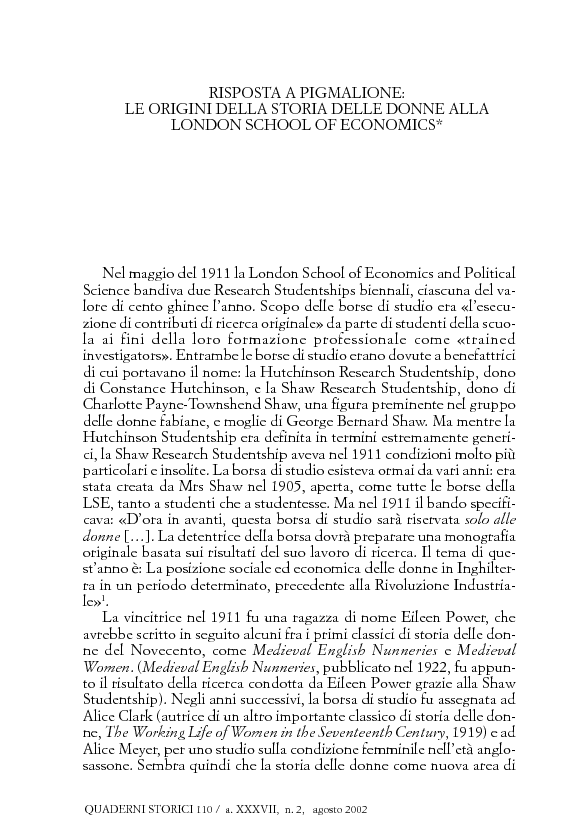