Attentive to the role of the intermediate jurisdiction, the juridiction-mage, and its relations with the supreme court of the Senate of Chambery during the 18th century, this article demonstrates how defence practices allow us to re-examine the place of the defendant in criminal justice. Since the Middle Ages, the legal tradition of the Dukes of Savoy highlighted the special interest that authority manifested with respect to vulnerable groups. Widows, minors, orphans, the destitute and paupers benefited from the provision of counsel and legal assistance, particularly before courts that settled disputes. From the Royal Constitutions of 1723, legal assistance was extended to defendants tried in major criminal cases. In the intermediate courts and in the Senate of Chambery, defence practices appear to have been systematic for non-contumacious defendants. Thus, inquisitorial proceedings took on an adversarial nature and, once the secret investigation had ended, the opinions of the lawyer and prosecutor followed. Defence practices confirm that the legal authorities took into consideration the vulnerability of defendants in the face of the increasing complexity of the proceedings. The defendants' lack of knowledge of the law would require the assistance of a lawyer whose opinions, which although subject to legal restrictions, allowed a balance to be achieved in the proceedings. 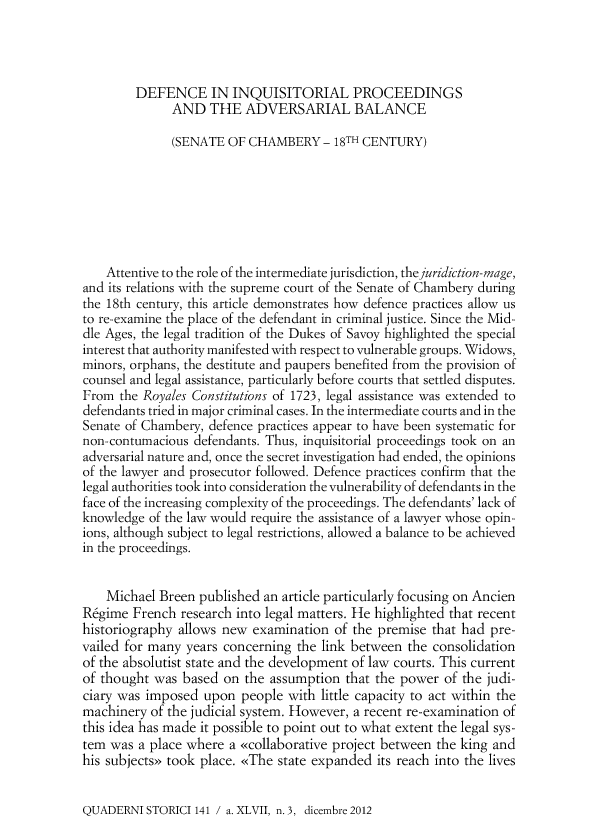