This article argues that political relationships in the sixteenth-century county of Nice and cisalpine Savoyard lands were characterized by competition among regionally-based political alignments. The interests shared by these regional groups were not only political and fiscal, but also cultural, and were distinctively shaped by the ways in which different territories experienced the Habsburg-Valois wars after 1536. Rather than taking for granted the utility of the category «Piedmontese» to explain political configurations in the cisalpine Savoyard lands, the existence of a regional identity in the mountainous southern lands of the county of the Nice, the Cuneese and the Monregalese is posited. This regionalist perspective then permits a re-assessment of the goals and functioning of the central fiscal institution of Duke Emanuel Filibert of Savoy, the Nice salt gabelle, and indeed of the duke's entire fisco-political strategy. Finally, the article explains how the fiscal institutions established in the early 1560s were designed in response to local and regional pressures, and how the system that resulted continued to mediate between regional and dynastic interests. In this sense, these institutions can be said to have been locally produced, their territorial significance only becoming visible when traditional categories of analysis are held in abeyance. 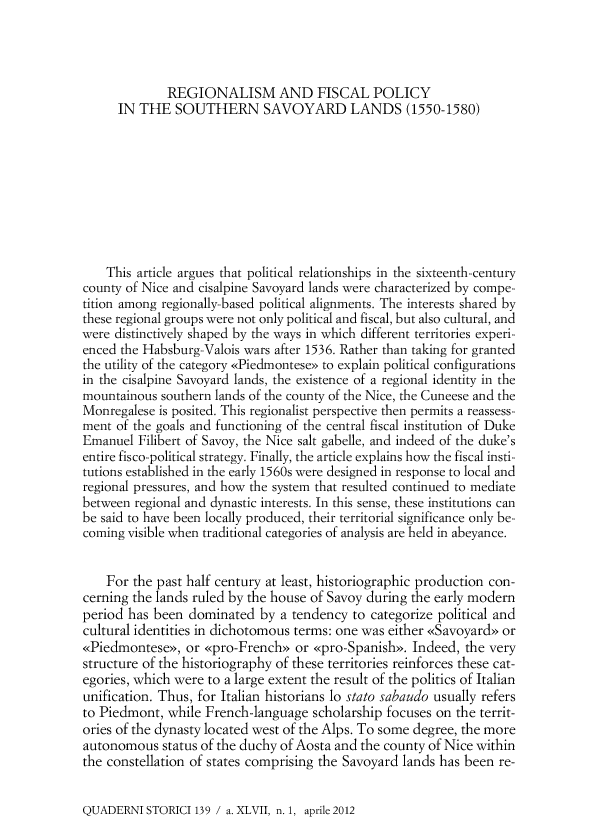