The aim of this article is to shed light on the ways in which ordinary people took part in the political life of rural communities in the Kingdom of Naples during the last decades of the old regime. In these societies, generally ruled by narrow élites, the lower classes seem to have been excluded from the most important affairs relevant to community life, such as the allocation of duties, food sales, and admission to municipal offices. By examining the disturbances that took place in Calabria in 1763-64 due to the huge famine that struck Italy, it is possible to assess the means by which country people could play a part in the struggles concerning the principles and rules of local life. Many rural communities rose up against provincial authorities and blocked corn requisitions in aid of the capital and other main cities. However, consideration of the riots that occurred in Rossano, Scigliano and Monteleone, and a careful reading of the complaints and grievances that often went with unrests, lets us discern conflicts within the rural community and catch sight of the rifts that sometimes went through it. Moreover the food shortage, by encouraging interplay with governmental and judicial authorities, enabled communities to process politically the social tensions that the famine brought to light. 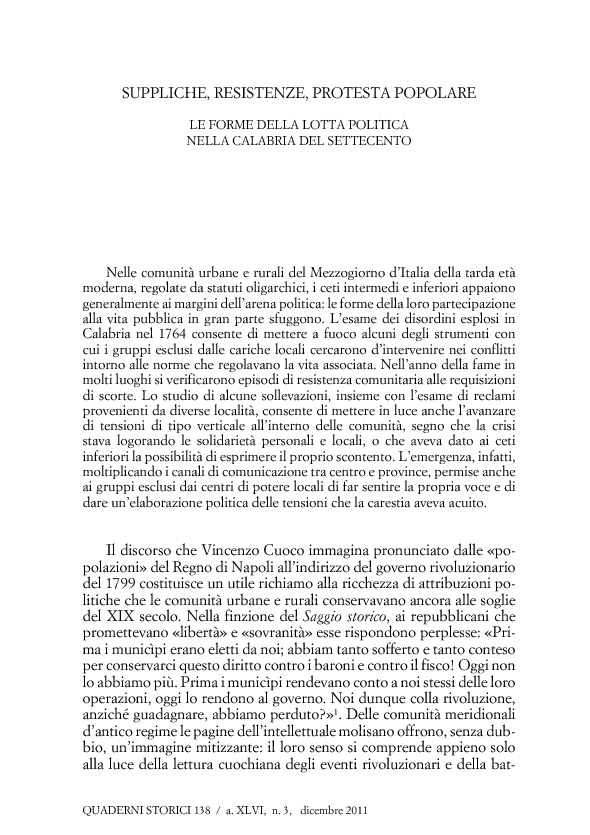