This essay is based on new archival findings concerning inquisitorial cases against the spiritual movement of «pelagini» or Pelagians active in Lombardy and Veneto in the second half of seventeenth century, and against the alchemist-adventurer Francesco Giuseppe Borri (1627-1695) who led the movement for a certain time. Based on unpublished documents preserved in the archives of the Congregation for the Doctrine of the Faith, this essay reconstructs jurisdictional conflicts between bishops, inquisitors and the Roman Congregation with reference to judicial proceedings instituted in the state of Milan, the republic of Venice, and Rome itself. An analysis of procedural documents reveals several anomalies that show how the Congregation of the Holy Office, amidst internal tensions and divisions stemming from the political and institutional context in which it operated, tried to bring a complex and elusive jumble of events, people and relationships into effective action against an outbreak of heresy. The documents also shed light on the origins of a movement of Pelagians in which prophecy, Jesuit spirituality, ideas about poverty, and millenarian themes were mingled and merged together. A strong link with Spanish religious culture can also be detected in the Alumbradism and mysticism of early Pelagians and in Borri's infrequent approach to «Lamine di Granada», whose impact in connection with the Immaculate Conception issue has yet to be studied. 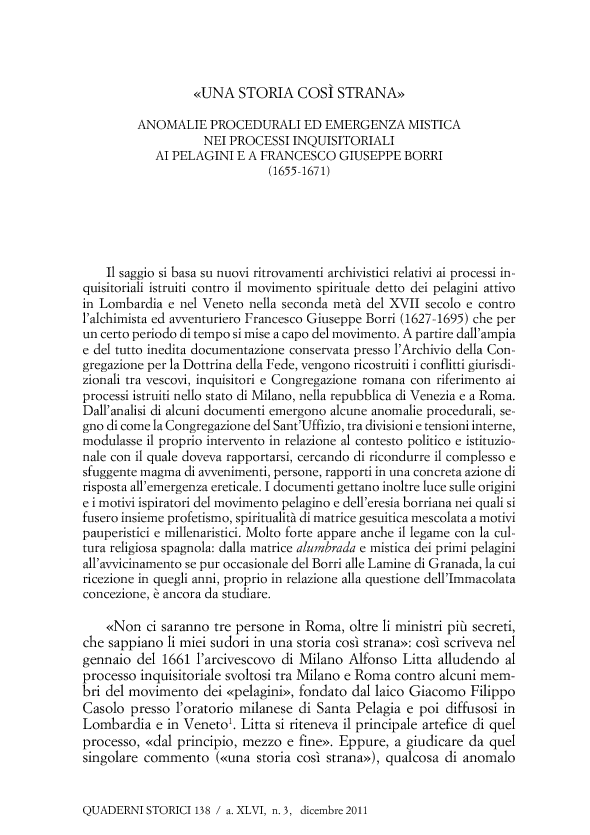