This paper examines the structure of the financial credit network of a stockbroker in Avellino, during the 1920s. Through the study of bankruptcy documents, this essay reconstructs the relationship between the bankrupt broker and a social and economic world that offered the apparent prospect to him of easy earnings through financial games. This work looks at the role of social circles, paying particular attention to the personal relations between the stockbroker and his «customers». The analysis of the relations between the protagonist and a banking system favourably disposed to support his inclination towards financial business completes the reconstruction of his relationship network. That triangulation reveals a widely informal character of credit relations and creates the illusion of easy access to money for financial deals. The aim of manipulating credit relations was not the conclusion of negotiations but, in fact, their procrastination. This fact led to an increasingly chaotic credit pyramid, typical of a period characterized by a sort of financial euphoria which was bound to be contagious even in the most peripheral financial markets. The weakness of such a system was clear as soon as the Fascist regime, in the mid-1920s, launched a stricter monetary policy which showed the untenableness of the stockbroker's credit relations, leading him to a crushing failure. 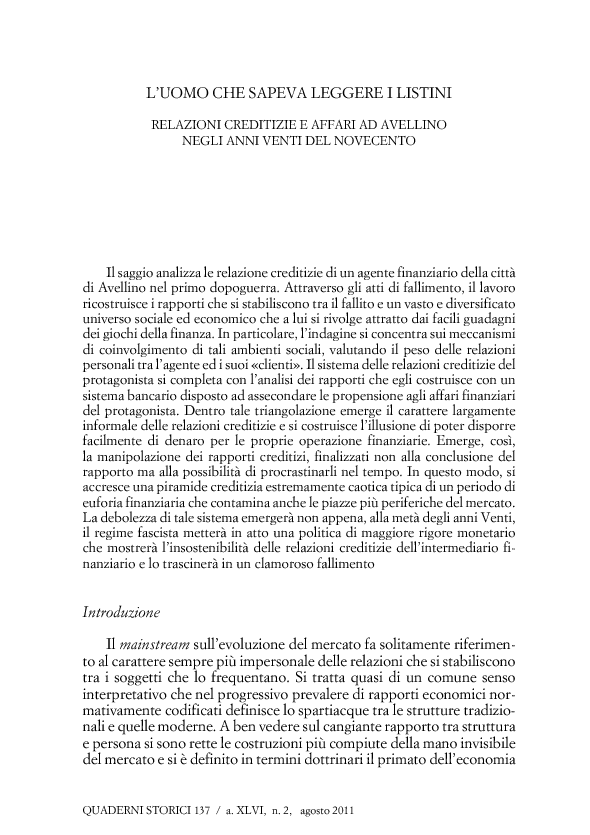