Recent studies have revealed that, in the second half of the 16th century, confiscations were a significant source of revenue for the Roman Inquisition, in the peak moment of its material construction and repressive action. The implications of confiscations were juridical and cultural as well as economic. This article makes some general points on a basis of a remarkably well-documented case study: the confiscations perpetrated by the Inquisition in the State of Milan in the second half of the Sixteenth century. Firstly, the article posits the arbitrariness of the historical distinction between inquisitorial proceedings of condemnation, on one side, and confiscation proceedings on the other. Secondly, the article shows how estimates played a crucial role in the condemnation-confiscation procedure. The act of appraising, in fact, needed the collection of specific information and witnesses; new emerging evidence could affect the ongoing trials and potentially lead to new lawsuits. Thirdly, the article maintains that the combined involvement of inquisitors, civic magistratures, central and local state institutions, feudatories and common folks in the act of confiscation, was an important way to establish a long-term cultural change: the juridical-cultural syncretism between ecclesiastical and secular authorities. 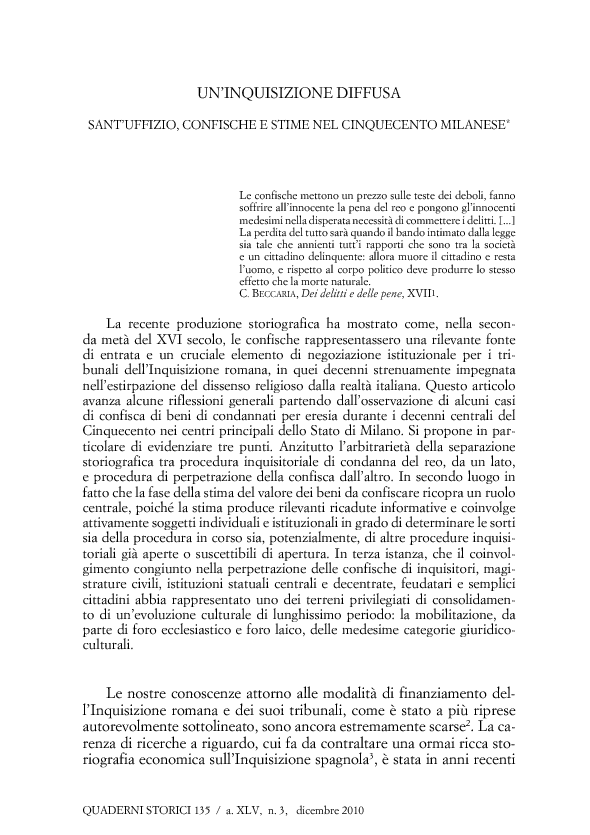