This article offers a survey of Italian colonial policy towards Muslim pious endowments ("waqf", pl. "awqaf") in Libya from 1911 to 1943. Through an analysis of 41 lawsuits presented to the colonial Court of Appeals and a detailed survey of the laws promulgated to reform the administration of the "awqaf" in Libya, this study reveals the legal mechanisms adopted by Italian jurists to regulate "awqaf" matters in their only North African colony. It demonstrates that, unlike other colonial powers in the region, the Italians did not set out to confiscate real estate that had been immobilized as pious endowments, nor did they seek to delegitimize the principles of Islamic law on which "awqaf" were founded. When confiscation of endowed property did occur, it was aimed at retaliating against those Muslim brotherhoods, such as the "Sanusiyya", which had taken arms against colonial rule. With few exceptions, Italians respected the legal validity of the "awqaf", and limited themselves to exercising more direct control over their administration by removing them from the jurisdiction of the "qadi" (Islamic judge) and placing them instead under the judicial oversight of state courts. 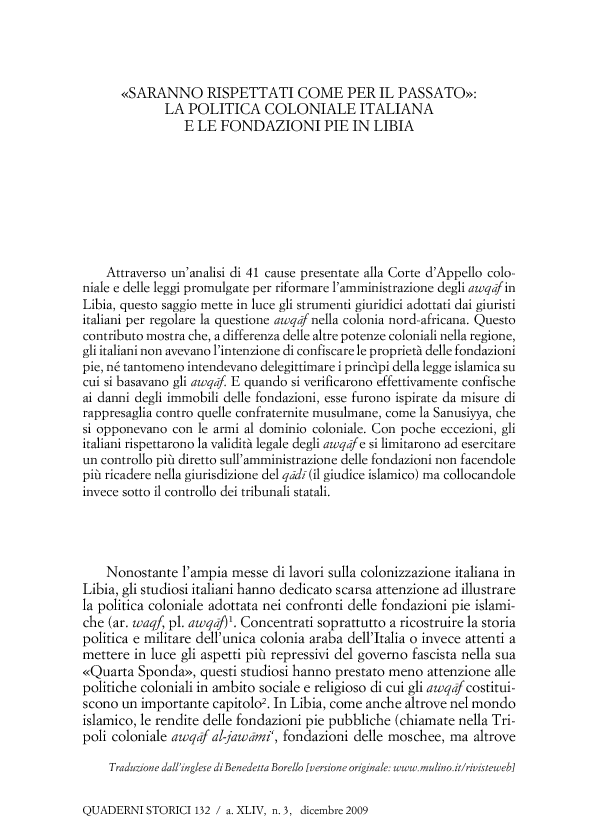