The plea in the Italian states becomes widespread towards the mid-14th century, modelled on the precedent of the papal plea. Bologna's is an early case; in some respects anticipator of later trends. The system of pleas was imported by Bertrando del Poggetto, papal legate in 1326, and was used as an instrument of government by Taddeo Pepoli in 1337. The analysis of the records of Pepoli's decrees allows the reconstruction of the types of pleas and the forms of pardons. The former can be divided in three main types: judicial pleas, which ask the reduction of punishment and the withdrawal of banishment; permission to sell legally bound goods, dotal property and that belonging to the "fumanti" living in the countryside; and in particular, grants for the summary procedure in order to overcome dead end trials, especially within the family. However, the distinctive formal feature of all three is in the pauperisation of the petitioners. They all adopt a "weak" position, of "paupertas" as in need of political protection. Upon this base of recognised weakness, the "dominus" applies a new form of power, explicitly sovereign in its nature. The protection of the "miserables" is to be understood as a sign of authority superior to the ordinary one of regular magistrates. This is an extra and super institutional power, which acts upon individual cases, in reason of the personal virtue of the prince, unattached by any law requirement. 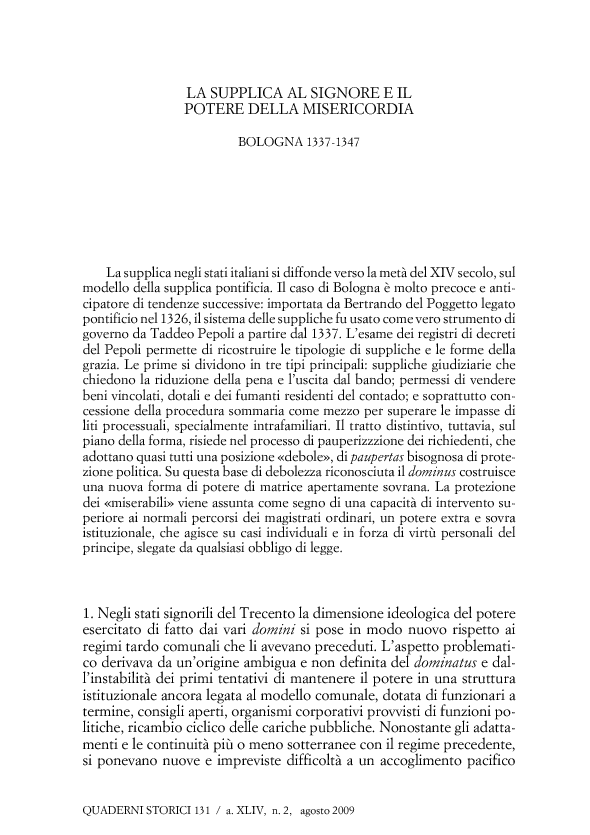