In the language of most of the superior jurisdictions of the West at the end of the Middle Ages, the category of "enormitas" included the worst breaches of law and legitimate order. This study shows that the category emerged in the practice of ecclesiastical reform and papal government during the 12th century. At a first stage, in the years 1130-1150, an "enormity" was a mere canonical irregularity, with no reference to a particular seriousness of the offence. In the 1160s and 1170s, the meaning of the category changed. From this period and until the end of the Middle Ages, it refered to a blend of infraction of the law, sin or stain, and potentially radical subversion of the christian public order. This new category, though it remained typical of the canonical sphere, spread widely in the secular world. The "enormitas" of the 13th-15th centuries was a protean notion. It had remarkable similarities with the roman "atrocitas" but also very specific features. The extension of its field of application as a qualification was variable, as were its procedural implications. In many contexts, the category tended to embrace the whole criminal sphere. On the other hand, its use was connected to the development of criminal procedures (inquisitorial of "extraordinary" procedures) caracterized by an unprecedented expansion of the "arbitrium iudicis" and therefore by a situation of generalized exception with regard to traditional procedural rules. "Enormitas" created a continuum between the limited area of crime of lese-majesty and the larger field of ordinary crimes. 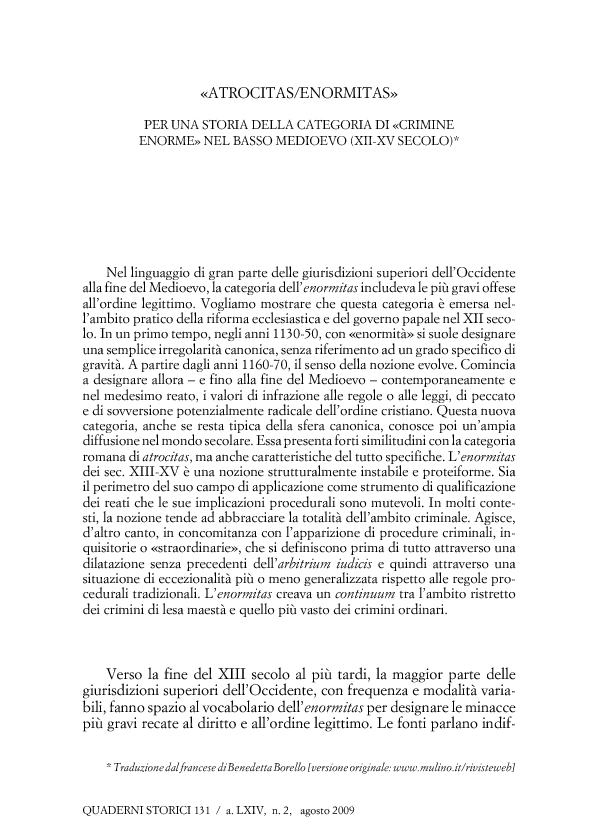