A Chigi manuscript in the Vatican Library contains a substantial number of medical expert opinions on the case of a woman, Maddalena Simonetti, who in 1664, despite believing to be pregnant, had not delivered a baby, but had instead experienced an abnormal movement in her womb, where the "something" she carried began moving in a desperate, convulsive way. The papal "archiater", Mattia Naldi thus asked 32 physicians and surgeons, from Rome and abroad, to thoroughly examine and explain the case. The physicians' solutions to the mistery were either traditional - the woman was suffering from a "mola", a concretion of flesh in the uterus - or innovative - a living animal, a worm or a snake, caused the movement. In 1685, at her death, Maddalena's body was dissected, showing abnormal "tumores" in her abdomen. The two sets of solutions point to two altogether different sets of "epistemic objects", while the autopsy offers evidences of a more "objective" kind. On the whole, the case well illustrates the difficulties of early modern medical knowledge, dealing with object hidden to the senses and with "signa" whose interpretation was far from certain. 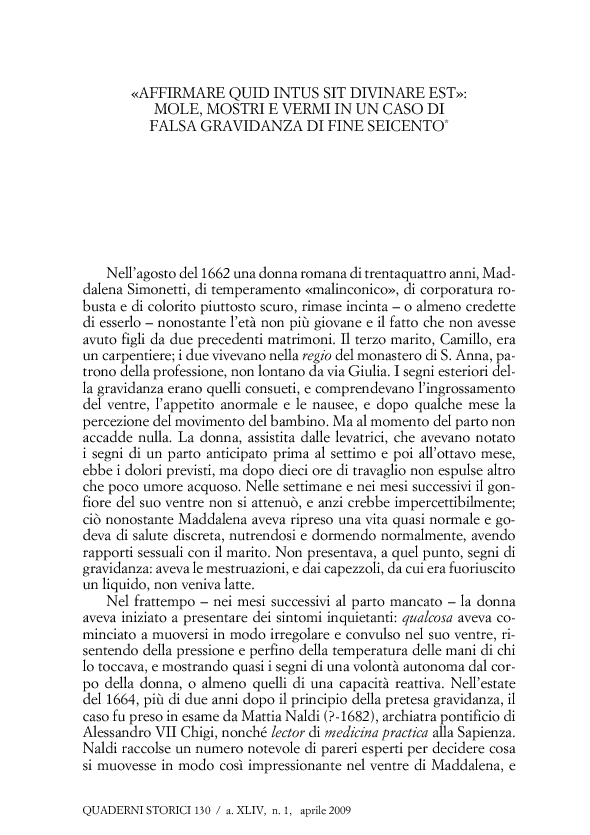