This article discusses critically the interpretation of Gambi's work on landscape planning as the expression of a typically rationalist approach, i.e. one mainly concerned with landscape protection. From his early work Gambi showed great interest for the multiplicity of values and points of view which mark the different branches of geography, and later proceeded to highlight the different ways humans have related to the environment and modified it throughout history. Moreover, his study of urban and rural structures was careful in following one interpretation of the historical and geographical differentials of environmental phenomena which avoided any general or universal visions. Finally, his analysis of the reorganiza¬tion of administrative divisions and landscape planning rejected, on one side, a perspective focused on a generalized environmental conservation ignoring present historical conditions, on the other, the idea of a widespread moderni¬sation indifferent to the sediments of the past. Following this approach, Gambi highlighted the representative dimension of statistic and cartographic documents as well as "vedute", and understood the intrinsic duplicity of the concept of "landscape" (being at the same time the thing itself and the view of it); at the same time, he refused to focus the geographical analysis on a mere discursive approach and to emphasize the symbolic dimension of landscape exclusively. Likewise, he understood the different points of view and the different interests of the agents of planning - especially in studying the history of land rehabilitation in Romagna and in later works - without any emphasis on the dialogic-interactive dimension of planning or the autonomy of planning intentions. Gambi's approach fully expresses his Enlightenment roots and his connec¬tion with the teachings of Cattaneo's, as well as his political experience with Giustizia e libertà as a young man. This is particularly evident in his approach to "problems" crossing the boundaries between different disciplines; in his call to political commitment; in his views on "practical" scientific research; in his interest for the interaction between "urban realities" and "iconographic vi¬sions", and between landscape as an image and landscape as an object itself. 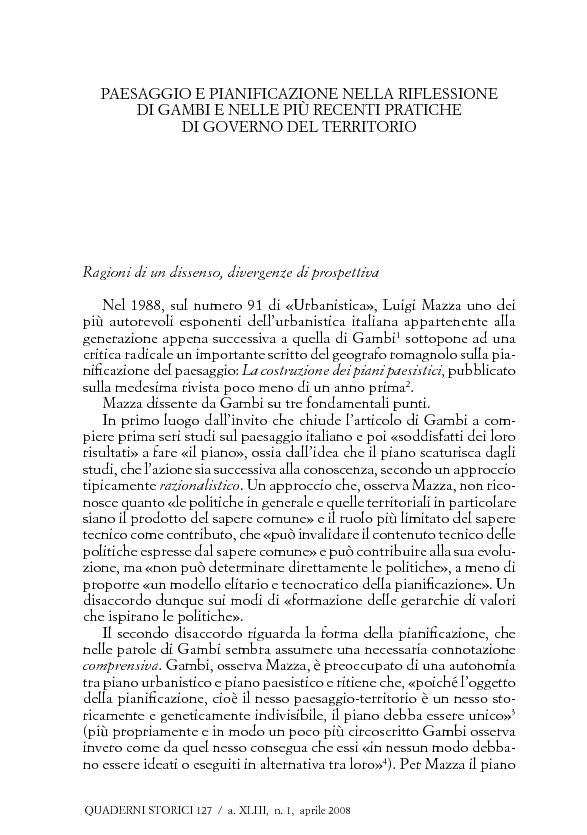