"Icannot remember nothing distinctly about our interview, except that Humboldt was very cheerful anf talked much": with these words Darwin recorded a personal encounter (1842) with the famous geographer in his "Autobiography". But in one of his last "Letters" (1881) he wrote "Imust have expressed myself badly about Humboldt", and admits to have always looked at him "as the founder of the geographical distribution of organism". In spite of this late appreciation, the relationships between the two disciplines remain a missing matter during the whole XX century. When Lucien Febvre was drawing "La Terre et l'évolution humaine", around W.W. 1, he was the witness of the lowest point reached by darwinism just fifty years after "On the origin of species", in the positivistic (neo-lamarckian) climate of that period. Physical geography itself couldn't have anything but a deterministic base. Instead, when Lucio Gambi published "Questioni di geografia", in the Sixties, the success of the darwinian theory was at its top, but again with a little concern from geographers. Gambi's matter was mainly to identify particular aims for human geography: his critique of the holistic ("cacuminale") geography is still soundly based, but in the last decades some new developments in evolutionary theories, mostly in paleontological (i.e. historical) field, offer important stimuli for a different approach to the debate. Authors such Stephen Jay Gould and Niles Eldredge are taken into account: the patterns of evolution have something to say to geography as well, and vice-versa (we hope). 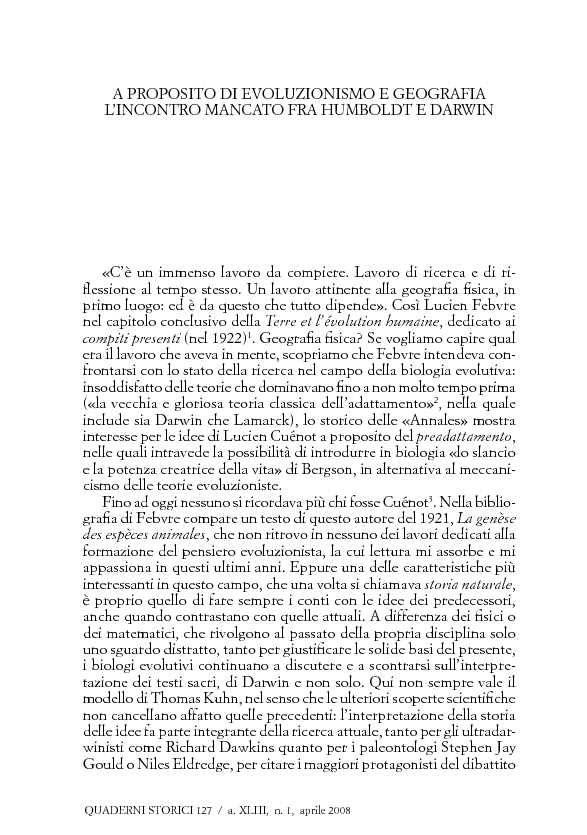