The use of the concept of "environmental framework" by Lucio Gambi reveals the dialectic nature of the relationship he observed between natural constants and intentional action of humankind in the transformation of geo¬graphical environments. Such a view is consistent with the sweeping criticism Gambi started directing from the 1950s at human geography, which because of its positivist genesis and its application of the methods of natural sciences, was unable to comprehend facts and problems - mainly historical - concern¬ing the human organization of the territory. Gambi's political commitment, born during the struggle against the fascist regime and directed towards the interpretation of geographical reality as the result of a historical process open to change, is at the core of his idea of human geography. In Gambi's opinion, human history and natural history followed two different evolutionary proc¬esses which, though interacting, cannot be reduced to one. Gambi does not consider these co-evolutionary as he sees natural acts as playing a merely pas¬sive role. Moreover he does not believe that biology and ecology can suggest interpretative models which can help understand human history. The most recent non-reductionist conceptions of the evolutionary biologist current (S.J. Gould, N. Eldredge, and others) propose to overcome the dualism between hu¬man history/biological history. This approach is consistent with less ideological visions of the human behaviour turned to seize the immanent potentialities in the processes. In this way, the synchronous nature of geographical representa¬tion could be reappraised, avoiding to reduce geography to historiography. Ahermeneutics spatiality could be opposed to a more static geographical and deterministic spatiality, as it is more attentive to potentialities and values and it is able to reproduce representations capable of intercepting the expectations for change. This point raise the issue concerning the "truth" of the geographical representations, which cannot be solved only by social consensus but it should be confirmed by facts. Always geography is history and makes history as it plays an important role in historical processes. Its representations are "true" if they are able to develop multilevel relationships with others and with the biosphere, carrying equity, responsibility and sustainability. 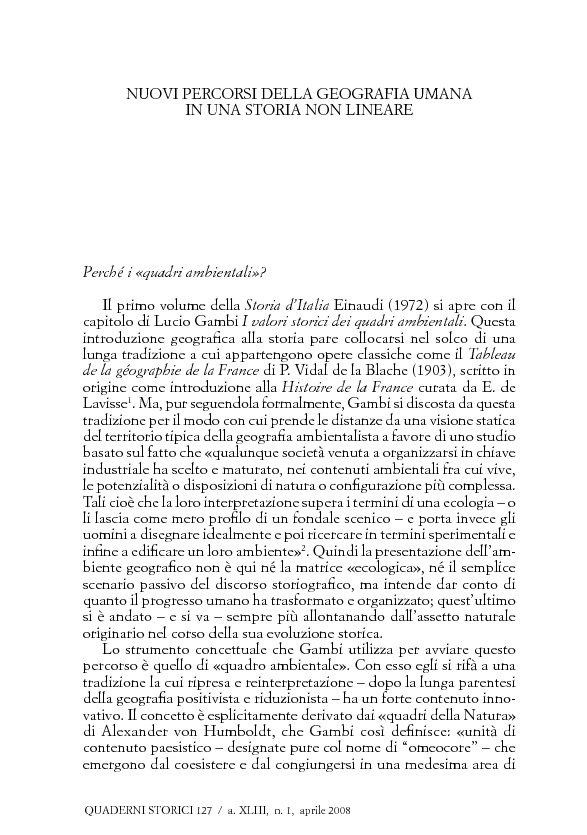