When we approach the conversion of Muslims and Jews to Catholicism we enter a land thick with frontiers: cultural, symbolic, geographical and spatial frontiers, a network where division, hostility and opposition live together with exchange, encounter, integration and relationships, where the difficulties of communication meet complicity and the possibility of reciprocal recognition. Conversion, though being a deep cultural and personal change often imposed rather than chosen, is a remarkable point of view for the study of exchanges and borders, of a mobility made of cultural and religious passages, frontiers more difficult to negotiate and "tame" than economical and political ones. This work focuses on the institutions destined to catechumens and especially on the documents concerning the Roman model born in 1543. The Houses of Catechumens were crossroads of religious minorities, a place where different cultural, social and identitarian paths met, the centre of a mobility which was physical and spiritual at the same time. With a distribution that nearly covered early modern and modern Italy, so typically Italian in their invention - originating from Papal and Counter-Reformation policies, like ghettoes -, these institutions show how barriers created by Christianity against Muslims and Jews were elastic and adaptable in everyday social practices. The main focus of this work is the study of the conversion of Muslims, with a view to a comparative analysis of conversions of Muslims and Jews. 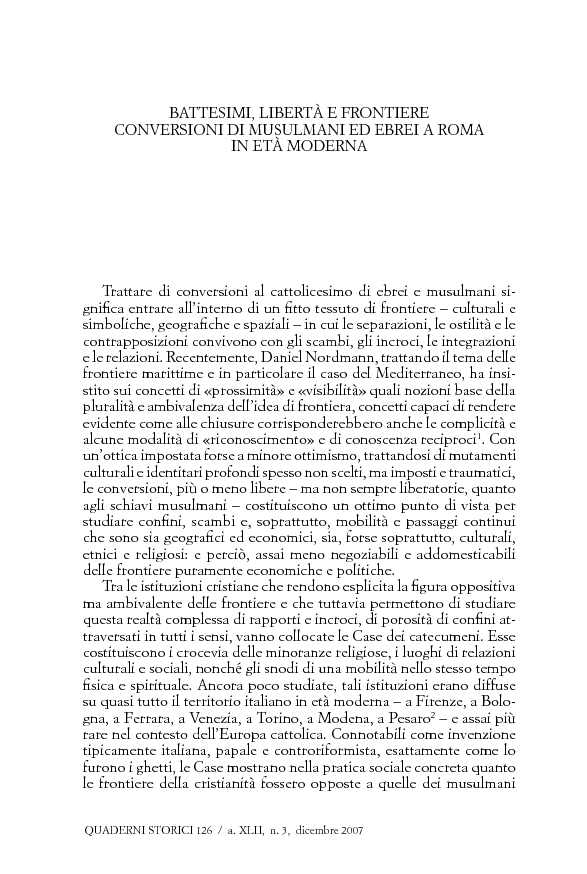