This work is a study of slavery based on remarkable new documents: the volumes concerning the beatification process of Juan de Prado (1563-1631), from the Vatican Archives, and the accounts and chronicles of his martyrdom written by his coreligionist Matias de San Francisco, held at the National Library in Madrid. Travelling to Morocco with two of his brothers "to support the much distressed Christian captives" ("soccorrere l'afflitti christiani priggioni"), the Spanish Franciscan starts a religious debate with the Moulay. Their discussion is heavily influenced by the complex relationships between Spain and Morocco and by the friar's own obstinacy in his mission to "enlighten the infidels" and convert them to Christianity in his personal quest for martyrdom. It is the prisoners and slaves, mostly Spanish and Portuguese, judges, secretaries and witnesses, who collect the "Informationes" which will be sent to the apostolic authorities in order to set in motion the complex apparatus responsible for the canonization of saints. Coming from an unusual point of view, these documents introduce us to the world of early modern slavery in Morocco and its specific features. The political relationships between European and North African states - truce, commercial treatises, diplomatic contacts and missions - affect the condition of slaves, which comes to represent an excellent indicator of the shifts in international politics on the opposite sides of the Mediterranean. The sources have been combined with information derived from legal, political and diplomatic documents in order to understand the position of the Spanish friar as a mediator between different cultures and conflicting religions, a man exposed to the risks of a marginal and dangerous role. Mediators always move on a border, in a sphere where two different worlds touch, a field often full of ambiguous figures: false renegades, braggarts, impostors, informers, spies. In our case political conflict is the factor that regulates religious dialogue, while religion - through the instrument of conversion - acts as "agent of integration", allowing the stabilization of passages from one society to the other. 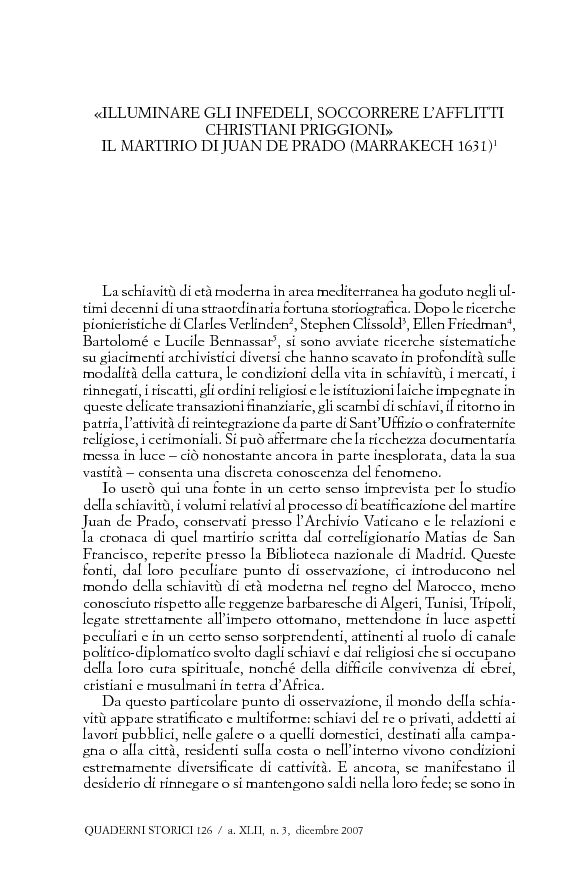