Can "architectural history" give a significant contribution to historical research? This paper aims to give some possible answers to this question, at least within the boundaries of an eighteenth-century urban transformation: the building of a "place d'armes" and town hall in Metz (the main construction phase spans the years 1763-1771). After a presentation of the case, and its relevance in architectural history, the text examines three aspects of the problem. The architectural drawings are discussed as an important source, that can testify of the explicit use of the architectural project as a ground for negotiation among actors. The "plan-masse", in particular, appears as much more than a formal consequence of social and economic strategies: it is a territory of discussion and verification of each other's position, for all the political and technical actors involved. Secondly, the construction of the town hall can be a useful case to highlight how space can be marked by discontinuity: as the town council tries to reclaim the physical use and symbolic characterization of internal space, the stonecut facades are built by the King's architect, Blondel, following "Parisian" conceptions in the use of materials, ornament, and techniques. The friction between local powers (and cultures) and State authoriy replicates itself through time, and can be observed in the modifications of the "place d'armes" and its buildings up to the 1920s: throughout the 19th century the rethorics of "style" characterize an approach in which the gothic cathedral is seen as a new object of interest. Interestingly, since 1860 the local élites try to resist State-imposed modifications also by the production of a historical discourse, that usually defends the status quo by underlining an ideal continuity between the city's buildings, public spaces, and the inhabitants through the ages. 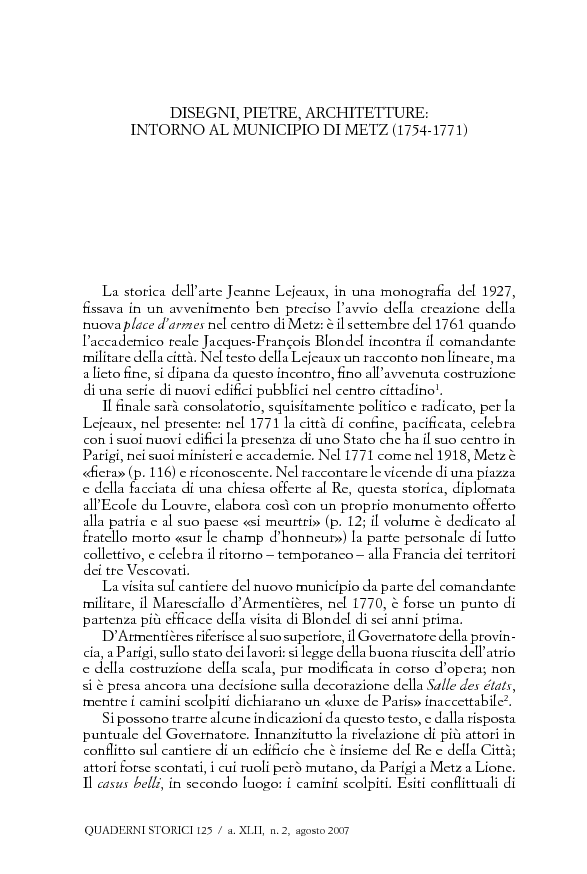