Popular discourses on the cultural dimension of globalization often use national cuisines as a case in point to prove how threatening is today's accelerated and complex interconnectivity to time-blessed collective identities and traditions. The paper deconstructs this myth analyzing the relationship between national cuisines and globalization in a historical perspective. First, the paper illustrates the historicity and cultural constructedness of national cuisines. The latter are, in fact, the product of social and technological change, textuality (often the work of middle-class supporters of nation-building projects), and a variety of food exchanges. The second section insists that, since the sixteenth century, food exchanges have taken place on a global canvas, entering time and again in the process of construction of national cuisines, as the cases of Mexico and Belize show. Moving toward the present, the third section addresses the fate of national cuisines as they are globalized in a world market where cultural difference is a prime commodity. A case study on the globalization of Japanese food suggests the emergence of post-national cuisines, which hold strong connections to a putative "point of origin" and yet are transnational, deterritorialized, multicentered and multicontextual. Finally, the case of postindustrial Great Britain demonstrates that the transition to the global food system have actually stimulated a myriad of "food discourses" other than the "globalization- threatens-our-national-gastronomic-identity"; one of the most powerful being - ironically - the praise of local/regional/national food heritages. 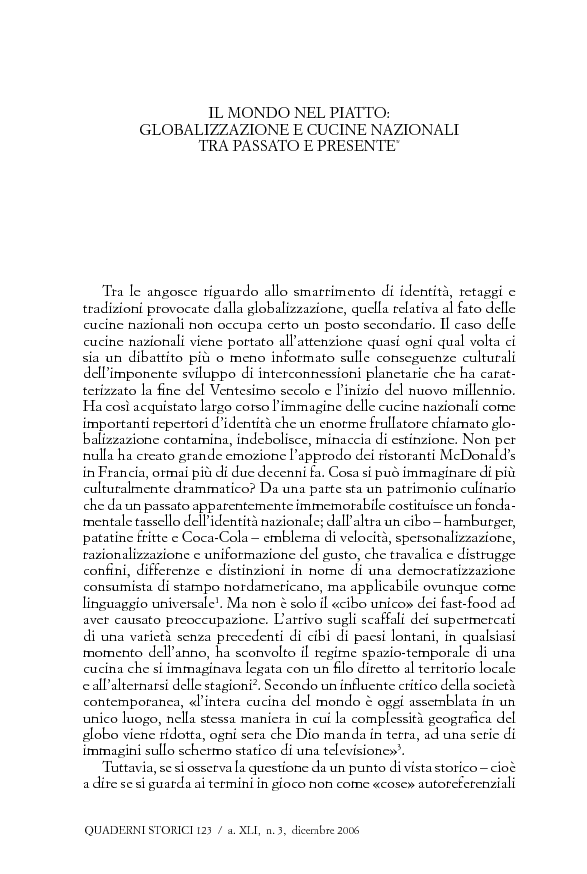