This essay examines the way in which the Swedish Chancellor Axel Oxenstierna (1583-1654) kept himself informed on current European affairs. For the foremost political leader of an upcoming military power on the international stage as Sweden was at the beginning of the seventeenth century, it was essential for Axel Oxenstierna to dispose over trustworthy representatives at the major courts and in the main cities in Europe. By contracting newsagents on a yearly basis, Oxenstierna assured himself of a frequent and wide-ranging supply of political news: manuscripts, newsletters, printed pamphlets, maps, newspapers, and the like. The article explores in detail two of Oxenstierna's Dutch agents, engraver Michel le Blon (1587-1656), and court painter Pieter Isaacsz (1569-1625), and their respective networks. Both le Blon and Isaacsz used their artistic background in their work as an agent and were able to let their career as a newsagent gain from their artistic endeavours, and vice versa, sometimes even using their art as a pretext for illegal communications. However, whereas le Blon stayed loyal to his patron, Isaacsz betrayed his real patron King Christian IV of Denmark when Oxenstierna hired him as his secret agent. The article deals with issues such as, why did Oxenstierna hire artists as agents, why did agents stay loyal or run great risks when deceiving, how were agents valued, and can we actually differentiate between agent Michel le Blon's loyalty and Pieter Isaacsz's deception as a spy? 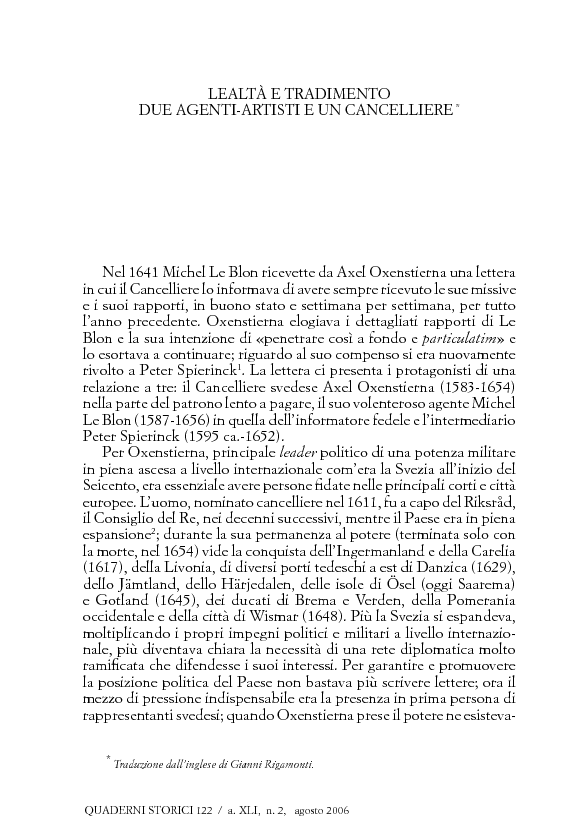