Focusing on the Swiss community living in 19th century Naples, this paper tries to discuss whether or not national identity influenced the life of an immigrant minority, analyzing the role played by other factors such as religion, social and economical status. By investigating the lives of a great number of individuals (862) and not just the elite composed by merchants, entrepreneurs, bankers etc., it was possible to study the kind of people who chose to come to Naples (their social and professional status, the place of origin, their cultural level), their experience of the migration itself (the influence of the Bourbon government migratory policies on their choice, the role of chain-migration), and their relationship with their fellow countrymen in the new context. These elements were then compared with those concerning the elite members and the other immigrant communities who lived in Naples at the time. The analysis conducted on the Swiss community confirms the variety and complexity of strategies employed by immigrants in the "Mezzogiorno", and it highlights the differences between common people and higher status ones. The higher percentages of exogamic marriages, of local people chosen as wedding witnesses, the different ways of associating with or working for local people suggest that Swiss soldiers, craftsmen, servants and apprentices integrated within the Neapolitan context much better and more rapidly than the members of the elite, who always chose to keep to themselves and proudly affirmed their own identity, establishing their own networks and meeting places and associating with people from their own country, or with other foreigners. Rather than being the result of a link to a "national family", the strategies of Swiss immigrants seem to have been influenced by other factors, such as a sense of class belonging, which meant sharing the same job and the same neighbourhood, while the importance of the religious factor is more difficult to define, but cannot be deemed as important as other scholars have argued. This case study suggests that even in the middle of 19th century national identity was not yet as strong a factor as it will be during the first decades of the next century, at least in this context. Status differences produced deeper cleavages within the so called "national community" than national or religious ones did, which leads us to suspect that immigrants to the Bourbon kingdom felt more proletarians, colleagues and neighbours rather than fellow Swiss citizens. 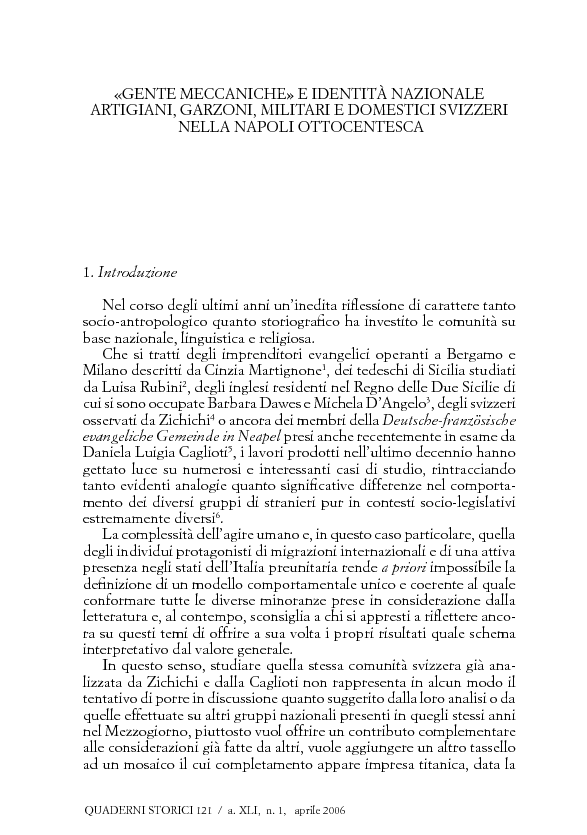