In the history of sainthood, cult and devotion, images play a role just as important as that played by relics. Being a representation of the saint that is portrayed, the holy image is an active presence, and the cult of the saint feeds on pictures whose creation comes from the need for the materialization of the sacred. Throughout the canonization process of Benedict the Moor (1594-1807) images were produced and listed, together with hagiographies, as an expression of the devotion for the "Santo Negro". The production started just after his death in 1589 and the transfer of his body into a wooden coffin, placed at the feet of the altar of Santa Maria di Gesù church in Palermo in 1611. Then it continued throughout the century, following the migration of his cult in Spain and Portugal, and then in the New World, where the cult was influenced by African culture. After a period of slight decline, the production of images flourished after 1743, Benedict's beatification now authorizing a devotion just tolerated by the Church until that time. The production continues today in all the places were the cult of the Saint is still strong (Sicily, Venezuela, Colombia, Brazil, Mexico etc.). However, it was in the 17th century that the Franciscan Order defined the characters of Benedict's sanctity and, at the same time, the contents and stylistic canons of his artistic representations. Through a close investigation of the images, we will see how Benedict came at first to symbolize the reformation movement of the Franciscan Order and its "Terzo Ordine" conception of a religious lifestyle for laymen, and then a special vocation for the evangelization of African slaves, therefore showing an "international" calling and supremacy over different religions. 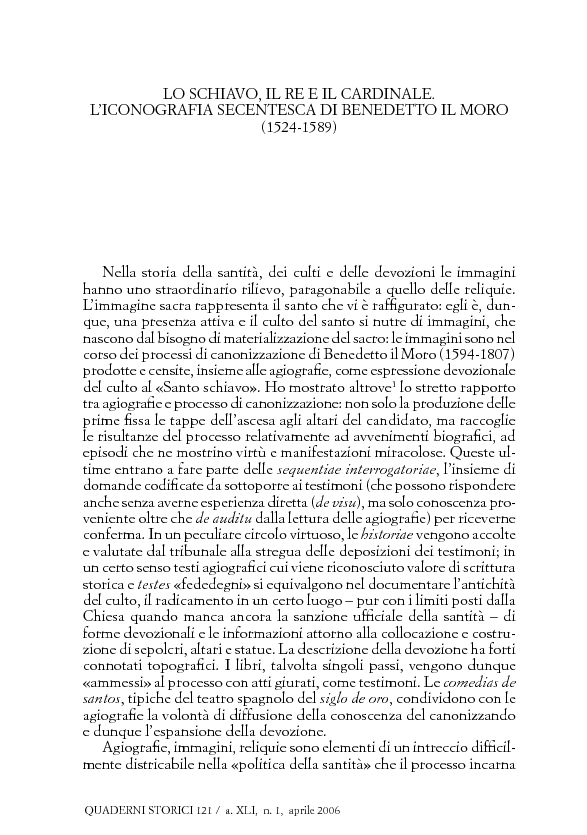