This article aims to shed light on the importance, the circulation and weight of rumours in 16th century Rome, stressing the analysis of the periods when the Papal see was vacant. Though in theory these were periods of silence, a silence incarnated by the conclave, they were also a time for an overabundant production of rumours compensating for the lack of information. We will observe the multiplication of these rumours and the way they increasingly monopolized knowledge while dealing with "real" pieces of information which were actually unreliable. We will then analyse the ways rumours circulated, calling attention on the role played by specific places (such as the "banchi" neighbourhood), practices (such as betting), media (notices, satires), and specific social contexts; then we will need to observe the excellent diffusion and the quick circulation of these urban voices. Finally, the third part of the article will examine the political function of these rumours and the dialogue they created between the "vulgo" and the cardinals assembled in the conclave. In this particular case of institutional life, rumours came to impose themselves as one of the agents of politics, an obstructive and always present one. My sources for this analysis were mainly produced by "graphomanes", people producing an overabundant number of writings, who immediately absorbed in their discourses the rumours they came across. These include the "Avvisi" kept in the Urbinati Latini manuscripts fund at Biblioteca Vaticana; the dispatches of Ferrara ambassadors in Rome from the Archivio di Stato in Modena; two long chronicles printed by Marino Sanudo and Tommasino de' Bianchi; various diaries written by masters of ceremonies of the Papal State, both printed and manuscript. In addition to these, we will consider some printed collections of "pasquinate", together with local chronicles, both printed and manuscript. 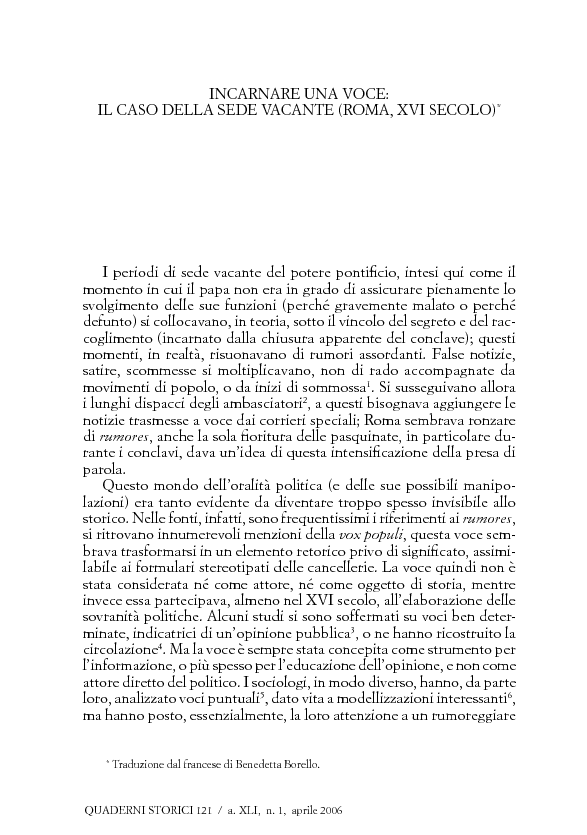