This study focuses on material culture and social relations in the city of Cairo in the late 18th and early 19th centuries. Based on extensive research in the Ottoman court archives, it takes as its point of departure the "bundle of rights" that property entailed and examines the uses to which historical actors put those rights, on one hand, and their legal definition as separate entities, on the other. It locates property at the nexus between one or several individuals, the set of relations uniting a proprietor to the object of property, and the object itself, all of which were subject to interpretation by jurists, judges, and owners. Taking into account the fact that full ownership could be divided into different yet compatible levels - notably, ownership of land, of real estate, and of the rights pertaining thereto - it reveals that these categories were subject, in practice, to use or ownership by different parties. By including "incomplete" forms such as usufruct within the overarching category of property, this study reveals that each level was subject to transactions independently of the others. Through inheritance and other forms of transmission, property relations and access rights thus affected land, buildings, and rights differently. By focusing on property, rather than on predefined social groups, this study shows how strategies of appropriation and devolution redefined such groups and served as a crucible for conflicts between the parties to patrimony: legators, Qur'anic heirs, creditors and beneficiaries of testamentary dispositions. Through an investigation of the legal and material relations between individuals, this study highlights the concrete uses of urban investment - including real estate, usufruct rights and patronage alliances - in apportioning limited resources to create solidarity among business associates, integrate slaves into the household, institutionalize a family name and prevent the dispersion of wealth among non-allied heirs. 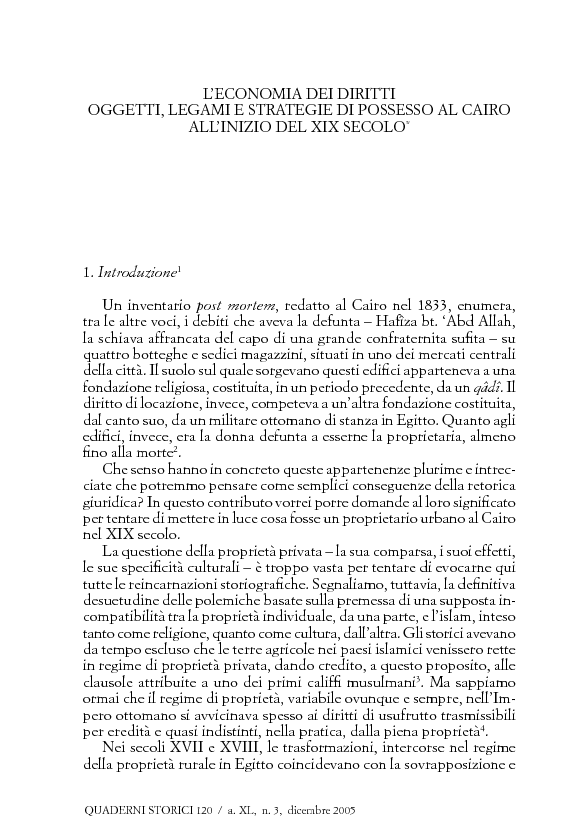