The spiritual kinship deriving from baptism was the most important form of ritual kinship in Europe in the past centuries. With baptism, the child underwent a second birth, in a new family (the "spiritual" family) represented by his godfathers and godmothers. The Catholic Church believed this to create a new kinship, therefore an impediment to marriage, between the godfathers and godmothers on one side, the godchildren and their parents on the other. As with natural kinship, the practices related to spiritual kinship vary throughout time. These transformations, however, remain largely unknown to us. This paper focuses on the mutability of practices at the beginning of the Modern Age, and on the transformations which affected them after the Council of Trent. The decision of the Council was to stop the "proliferation" of godfathers, maintaining that there had to be at least one, but no more than two spiritual kinsmen, and that in the latter case they must be of different gender. The evidence suggests that spiritual kinship was used in the past to build a dense social network. The possibility to choose many godfathers and godmothers gave this network extremely complex characteristics. The essay analyses the conversion from the old model of godparenthood to the post-Tridentine "couple model", working on data from Ivrea, Torino, Voghera, Finale Ligure and Mirandola. The conversion was not immediate: especially where choosing many godfathers and godmothers was customary, the population seemed to struggle with the problem of how to manage baptisms. 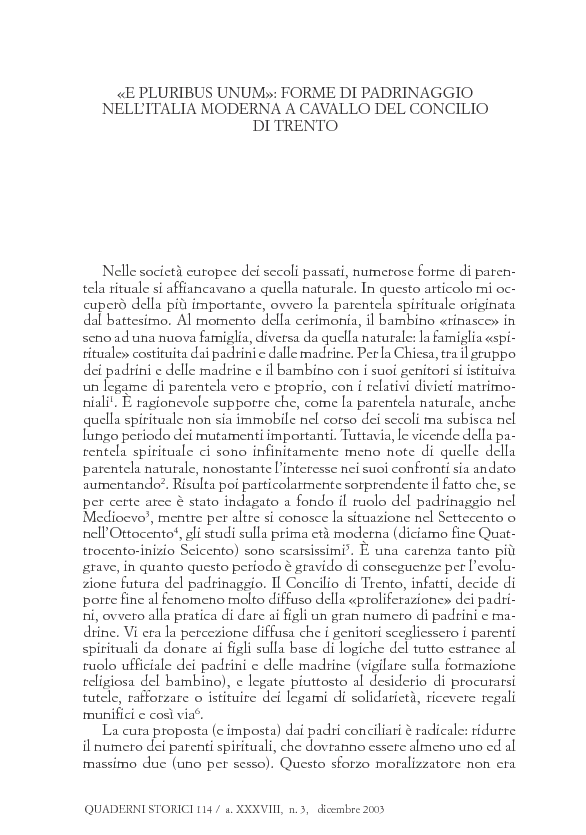