This article is a comparative analysis of Jewish philanthropy in France, Italy and England in the second half of the nineteenth century. By applying the analysis of gender, class and ethnicity to the study of Jewish philanthropy, we have demonstrated how the social integration of upper-middle-class families in France, Italy and England moved along different paths, which depended on the different nature of the relations between civil society, religious minorities and the state. The denominational character of English philanthropy, the importance of voluntary institutions in England and the impact of immigration framed the peculiarity of Anglo-Jewish social politics. This contrasts with the situation in France. Here, although upper-middle-class Jews continued to be affiliated with Jewish institutions, they did so mainly through patronage and financial donations, while maintaining a certain degree of detachment, in order to show to themselves and to others the success of their individual integration. Assimilating the values of the French Republic, they were particularly active in the foundation of the Republican civil society at the beginning of the twentieth century. The distance from Jewish institutions also characterized the lives of Jews in Italy, where women and men preferred to dedicate their energy to secular philanthropy. The article also explores the role of women in the public sphere in the three countries. The different conceptions of Jewish and secular public spheres, and of the women's role within them, together with the different strategies adopted with poor co-religionists, challenge the interpretation of a linear and single path to the modernization of Western European Jewry. 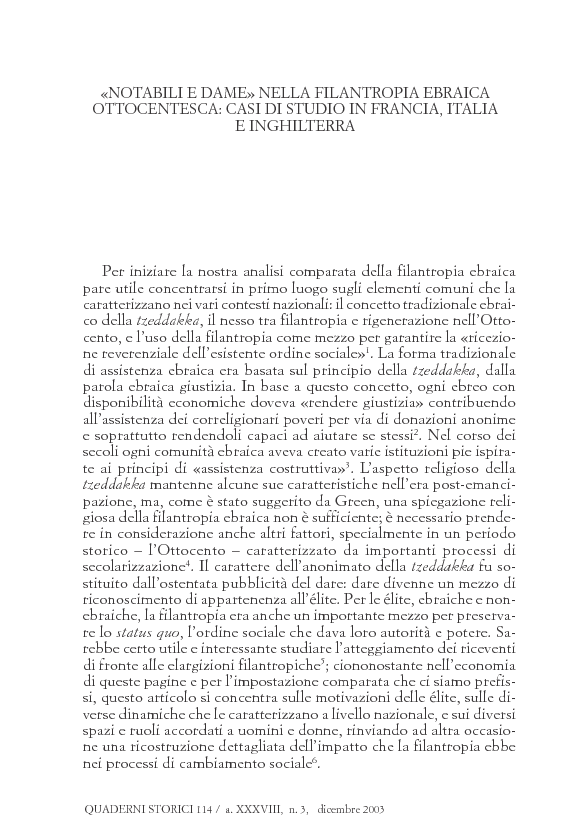