The article offers an analysis of Mediterranean slavery, focusing for its observations on a city - Bologna - which is far both from the sea and from the land borders of the Ottoman empire. This choice shows how pervasive slavery was: not only do we find citizens of Bologna who, far from their homeland, fall into the hands of the Turks, but there are slaves in Bologna as well, although, in both cases, in limited numbers. Ever since the 1580s, the so-called Opera del riscatto (i.e. the Foundation for the Redemption of Slaves), run by the Arciconfraternita of Santa Maria della Neve, is active in the city. Initially subordinate to the Roman Arciconfraternita of the Gonfalone, from the 1630s it works independently from Rome to free Bolognese citizens fallen into slavery. The processions organised to celebrate the return of freed slaves and the booklets with the story of their slavery, published when they were redeemed, allow us to analyse the contradictory picture of the Islamic world as portrayed in the city. On the one hand it is considered "barbarian" and a source of contamination, on the other it provokes the curiosity and interest of many people, not all as famous as Luigi Ferdinando Marsili, who's initial curiosity became later on excellent knowledge of the Turkish world). The result is then a complex picture, where the aggressively negative judgement is mitigated by multifaceted and less categorical attitudes. The relative ease with which the Turks arrived in Bologna as slaves would appear to become integrated must not, however, be misleading. The attainment of freedom appears to be a consequence not of conversion per se, but of conversion at the Casa dei Catecumeni (the suggestion is that there were other conversions too, with very different outcomes). Moreover, the close examination of one case proves that, even when integration would appear to be perfect, on the one hand elements of the original culture may have survived in the converted person, while, on the other hand, aggressive and discriminating attitudes in the Bolognese could have been provoked by these elements. In its conclusive remarks, the article introduces the issue of the complex identity of slaves and former slaves. 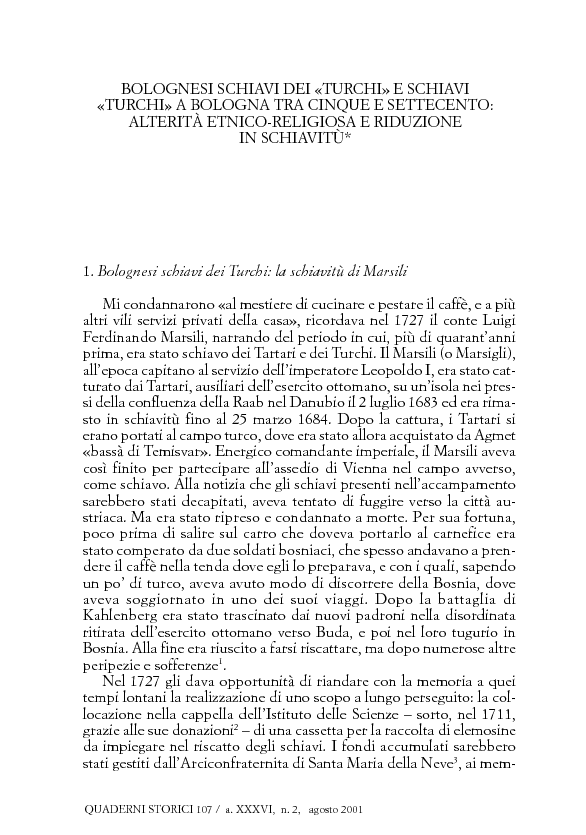