The presence and the status of the Christian slaves in Algiers during the Ottoman period (XVIth-XIXth centuries) have been the subject of many studies and publications during the colonial period and in the last decades. From an historiographical point of view, these studies are fundamentally based on a large amount of European literature, primarily constituted by the relations of former slaves and by the reports on the periodical redemption organised by the Catholic church, as much as by some documents from the archives, French and Italian especially. The known local (Arab and Turkish) sources are much more meagre, nearby non-existent, with the exception of a very interesting numerical list, first published in 1852, which covers almost entirely the last century of the Ottoman rule, from 1736 to 1816. The aim of this article is to reconsider the available data concerning the quantity of the Christian slavery in Algiers, also following the results of recent studies on the Arab cities, and Algiers in particular, during the Ottoman period: these studies show that the data concerning the population and the social groups of the city by the European sources - which during the second half of the XVIth century and the XVIIth ascribe to Algiers even 150.000 inhabitants and 40.000 Christian slaves -, in view of the extent and the physical size of the city, are generally inflated. 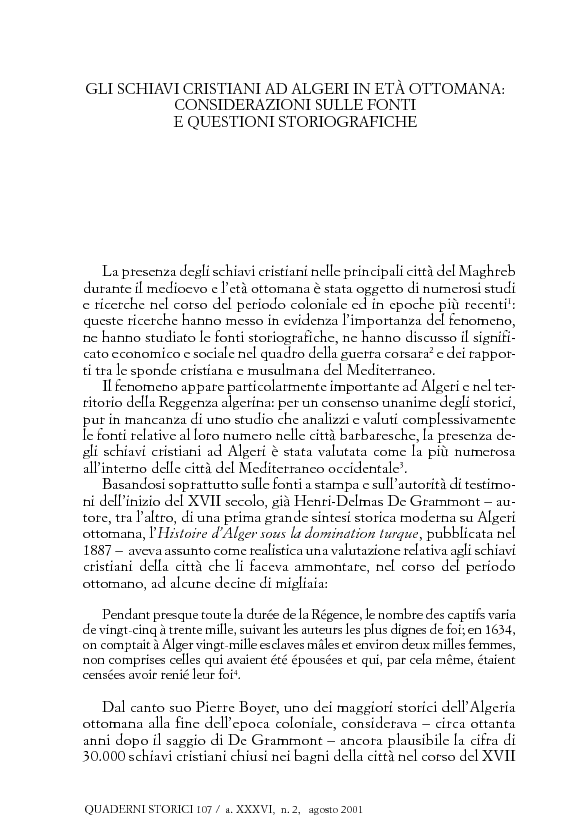